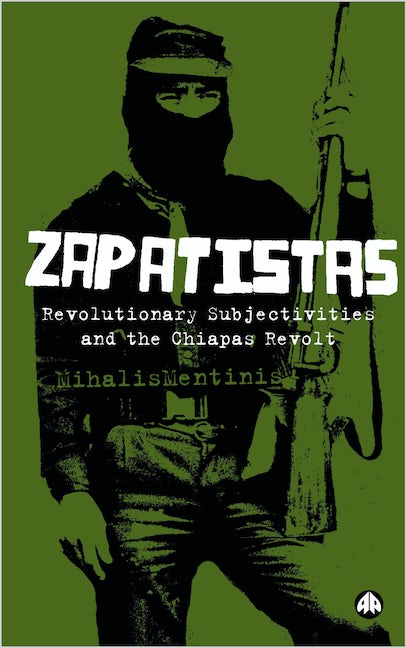 The Chiapas Revolt and What It Means For Radical Politics

A bold new account of the movement and its contribution to political theory
The Zapatista Army for National Liberation burst onto the world stage on 1 January 1994. Zapatista commander Subcomandante Marcos announced a revolution, and declared war on the Mexican government and global capitalism. Since then, the Zapatistas have inspired thousands of activists across the world. They have attracted much attention from political theorists and analysts. Despite this, there is little consensus about the real nature and efficacy of the movement.

Zapatistas provides a bold new approach to understanding the insurrection. Mentinis spent nine months visiting the Zapatista autonomous zone, and the result is this unique exploration of the indigenous political theory emerging within the movement. Combining this with an analysis of the integrity of the Zaptista project, Mentinis draws on the concept of the 'event' from Badiou, ideas from Situationism, the 'project of autonomy' of Cornelius Castoriadis and the 'constituent power' of Antonio Negri, to present a rigourous account of the movement and the impact it has had on radical political theory.

Mihalis Mentinis is a researcher in the discourse unit at Manchester Metropolitan University. His main interest and previous publications concern radical politics and revolutionary subjectivities. He is the author of Zapatistas: The Chiapas Revolt and What It Means For Radical Politics (Pluto, 2006).

'A bold new approach to the Chiapas insurrection, to explore what the Zapatistas mean for the future of radical politics everywhere. Drawing on situationist and autonomist ideas, this is a truly innovative read!' - Philosophy Football 'Illuminates new modes of political organisation, and provides theoretical and practical engagement with the Zapatista uprising against contemporary neoliberal capitalism. The reader will be better armed with a desire for revolution' - Professor Ian Parker, Manchester Metropolitan University 'Very interesting. Mentinis takes discussion of the Zapatistas to a level beyond most commentaries' - Professor John Holloway, Instituto de Ciencias Sociales y Humanidades of the BenemÈrita Universidad Autonoma de Puebla in Mexico 'Shows convincingly that various discourses which have tried to explain the movement from within their pre-constituted terms are flawed' - Raymond van de Wiel, Birbeck University of London, Political Studies Review
Preface
1. Zapatista Chronicle
1.1 The Early Years: Prehistory of the EZLN
1.2 Zapatista Chronicle 1994-2001
1.3 'Check'!... but not 'Mate'
2. Theories and Perspectives on the Zapatista Insurrection
2.1 Gramscian Approach
2.2 Laclau and Mouffe's Theory of Discourse
2.3 Academic Autonomist Marxist Approach
2.4 Non-Academic Radical Left Perspectives
2.5 Problems and Limitations of the Readings of the Zapatistas
3. The Project of Autonomy, Constituent Power and Empire
3.1 Ontological Theses
3.2 The Imaginary of Autonomy
3.3 From Radical Imaginary to Constituent Power
3.4 Genealogical Moments: The Re-mergence of Autonomy
3.5 Empire: The World Order
4. On Revolutionary Subjectivities
4.1 Fidelity to an Event
4.2 The Event and Constituent Power
4.3 Not Just Any Event
4.4 Constructed Situations
4.5 Zapatistas: An Evental Situation
4.6 The Three Subjects of Fidelity
4.7 Towards a Future Event
5. Reading the Zapatistas Critically
5.1 Revolutionaries or Reformists
5.2 Zapatista Nationalism
5.3 Zapatistas and the State
5.4 Zapatistas and the Global Struggle
5.5 Autonomy's Black Holes
6. Indigenous Imaginary and Zapatista Masks
6.1 Indigenous Metaphysics
6.2 Language and Reality
6.3 Maya Epistemology
6.4 Zapatista Masks
7. Conclusion
7.1 Implications for the future
7.2 Towards a Theory of Militant Subjectivity
References
Index
Published by Pluto Press in Apr 2006
Paperback ISBN: 9780745324869