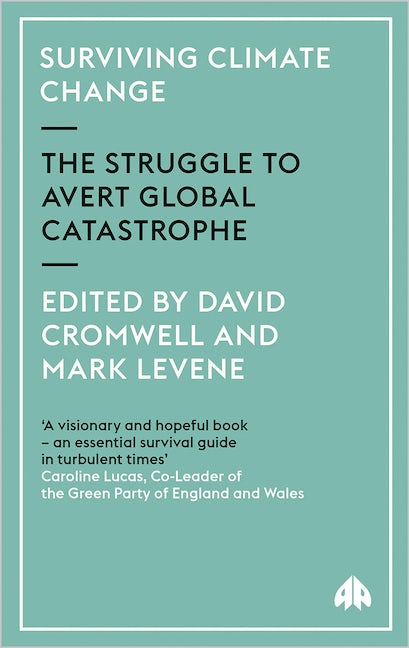 The Struggle to Avert Global Catastrophe

Governments and business keep reassuring the public they are going to fix the problem. This book brings together some leading activists who disagree. They expose the inertia, denial, deception -- even threats to our civil liberties -- which comprise mainstream responses from civil and military policy makers, and from opinion formers in the media, corporations and academia.

An epochal change is called for in the way we all engage with the climate crisis. Key to that change is Aubrey Meyer's proposed Contraction and Convergence framework for limiting global carbon emissions. This book, which also includes contributions by Mayer Hillman and George Marshall, is a powerful and vital guide to how mass mobilisation can avert the looming catastrophe.

Mark Levene is a Reader in History at the University of Southampton. He is the author of Surviving Climate Change (Pluto, 2007).

'A vital point of reference for anyone who believes that neighbourhood and community initiatives will be essential in rising to the challenge that is climate change' - Caroline Lucas, Green Party MEP for South East England 'An insightful and inspiring collection of essays from some of the foremost thinkers on climate change' - Mark Lynas, author of High Tide (Flamingo/HarperCollins, 2004)
Preface
Introduction: Survival Means Renewal, Mark Levene and David Cromwell - Both University of Southampton
Part I The Big Picture
1. The Case for Contraction and Convergence, Aubrey Meyer
Part II The State and its Apparatus
2. Thinking the Worst: The Pentagon Report, Dave Webb - Leeds Metropolitan University
3. Preparing for Mass Refugee Flows: The Corporate Military Sector, Steve Wright - Leeds Metropolitan University
4. Britain, Political Process and the Consequences for Government Action on Climate Change, James Humphreys
Part III Critical Players
5. First they Blocked, Now do they Bluff? Corporations respond to Climate Change, Melanie Jarman
6. Mostly Missing the Point: Business Responses to Climate Change, David Ballard - University of Bath
7. The Mass Media, Climate Change and how things might be, John Theobald and Marianne McKiggan
8. Having the Information but what do you then do with it? The Scientific and Academic Communities, Jonathan Ward - University of Bristol
9. Asleep on their Watch: Where were the NGOs?, George Marshall
Part IV The Challenge Ahead
10.Clearing the Pathways to Transformation, Susan Ballard and David Ballard
11. Averting Climate Change: By Force, Persuasion or Enlightened Self-Interest ? Jim Scott
Afterword: Where Do We Go From Here? Mayer Hillman - Policy Studies Institute, London
Appendix 1: A Layperson's Glossary of the Global Politics of Climate Change, Tim Helweg-Larsen (Centre for Alternative Technology, Machynelleth, Wales) and Jo Abbess
Appendix 2: Climate Change campaigns and other relevant links
Notes on Contributors
Index