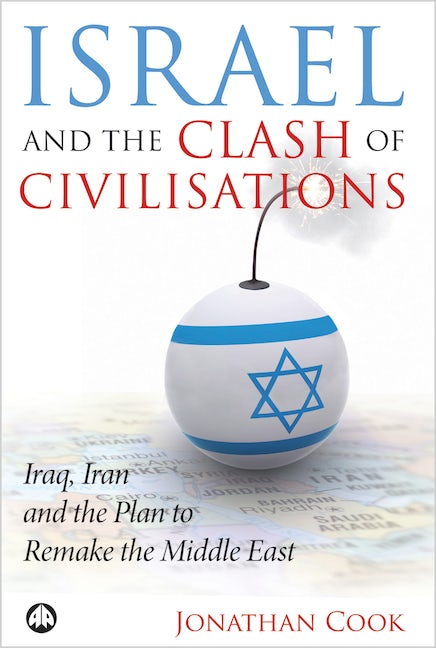 Israel and the Clash of Civilisations

Iraq, Iran and the Plan to Remake the Middle East

Argues that the current chaos in the Middle East was always the intention of the Bush administration and Israel.
Journalist Jonathan Cook explores Israel's key role in persuading the Bush administration to invade Iraq, as part of a plan to remake the Middle East, and their joint determination to isolate Iran and prevent it from acquiring nuclear weapons that might rival Israel's own.

This concise and clearly argued book makes the case that Israel's desire to be the sole regional power in the Middle East neatly chimed with Bush's objectives in the 'war on terror'.

Examining a host of related issues, from the ethnic cleansing of Palestinians to the role of Big Oil and the demonisation of the Arab world, Cook argues that the current chaos in the Middle East is the objective of the Bush administration - a policy that is equally beneficial to Israel.

Jonathan Cook is a former staff journalist for the Guardian and Observer newspapers. He is the author of Israel and the Clash of Civilisations (Pluto, 2008), A Doctor in Galilee (Pluto, 2006) and Blood and Religion: The Unmasking of the Jewish and Democratic State (Pluto, 2006). He has also written for The Times, Le Monde diplomatique, International Herald Tribune, Al-Ahram Weekly and Aljazeera.net. He is based in Nazareth.

'One of the most cogent understandings of the modern Middle East I have read. It is superb, because the author himself is a unique witness who blows away the media debris' - John Pilger, author of Freedom Next Time (2006) and The New Rulers of the World (2003) 'A compelling account of the recent wars for Middle East oil, untangling a complex web of interests shared by the neocons, Israel and the Bush White House' - David Hirst, author of The Gun and the Olive Branch (2003) 'American-Israeli relations have intrigued, occupied and preoccupied two generations of scholars and of politicians around the world. Which of the two is the contemporary Rome and which is the belligerent Sparta in the Middle East? Jonathan Cook's book undeniably enriches and elevates the debate' - Afif Safieh, Palestinian Ambassador in Washington 'In this well-researched and very readable book, Nazareth-based journalist Jonathan Cook traces the developments of the last few decades that have led to the dangerous and deplorable state of affairs in the Middle East today' - Sally Bland, Jordan Times
Preface
1. Regime overthrow in Iraq
2. The Campaign against Iran
3. End of the Strongmen
4. Remaking the Middle East
Bibliography
Index
Published by Pluto Press in Jan 2008
Paperback ISBN: 9780745327549
eBook ISBN: 9781783715916