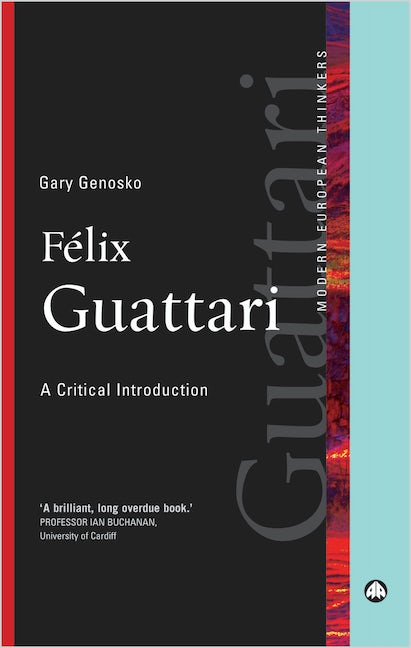 Guattari's main works were published in the 1970s and 1980s. His background was in psychoanalysis -- he was trained by Lacan and he practised as a psychoanalyst for much of his life. He developed a distinctive psychoanalytic method informed always by his revolutionary politics.

Guattari was actively involved in numerous political movements, from Trotskyism to Autonomism, tackling ecological and sexual politics along the way. A true believer in collectivity, much of his work was written in collaboration, most famously with Gilles Deleuze.

This is also an introduction to key concepts such as schizoanalysis, transversality, a-signifying semiotics and various kinds of machine.

Gary Genosko is currently Canada Research Chair in Technoculture at Lakehead University in Canada. He is the author of several books on Felix Guattari, including Felix Guattari (Pluto, 2009).

'A brilliant, long overdue book. It shows once and for all that Guattari was not merely one half of one of the twentieth century's greatest intellectual collaborations, but also a powerful thinker in his own right' - Ian Buchanan, Professor of Critical and Cultural Theory, Cardiff University, founding editor of the Deleuze Studies Journal 'Provides valuable insight into the ideas that animated Guattari's thought as well as his life. It is a superb introduction to key concepts such as schizoanalysis, transversality, a-signifying semiotics and various kinds of machine' - Professor Paul Patton, University of New South Wales 'Offers us so effective a critical introduction to the work of Guattari that it leads its reader to think that the century of crisis in which we are currently immersed could well be Guattarian' - Professor Eric Alliez, Centre for Research in Modern European Philosophy, Middlesex University. Author of The Signature of the World: What is Deleuze and Guattari's Philosophy? (2004) and Capital Times (1994)
Introduction
1. The Formation of a Young Militant
2. Transversality and Politics
3. Subjectivity, Art, and Ecosophy
4. A-signifying Semiotics
5: Informatic Striation
6. Minor Cinema
7. Affect and Epilepsy
Conclusion
References
Index
Published by Pluto Press in Apr 2009
Paperback ISBN: 9780745328201
eBook ISBN: 9781783714506