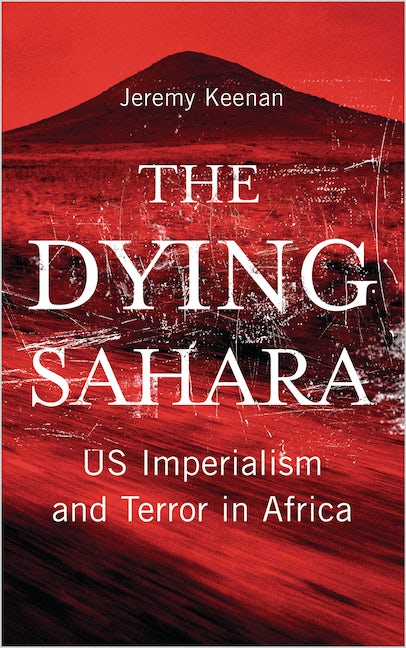 US Imperialism and Terror in Africa

Beginning in 2004, with what local people called the US 'invasion' of the Sahel, the book shows how repressive, authoritarian regimes - cashing in on US terrorism 'rents' - provoked Tuareg rebellions in both Niger and Mali, caused a new narco-trafficking branch of Al-Qaeda and created instability in a region the size of western Europe. Exposing the suspected complicity of the World Bank, the tumult caused by US's new new combatant African command (AFRICOM), and the chilling tactics used to perpetuate the myth that Africa is a hotbed of Islamic terrorism, Jeremy Keenan proves his resolve to 'defeat the lie'.

Jeremy Keenan is a Professorial Research Associate at the School of Oriental and African Studies. He has written many books including The Dark Sahara (Pluto, 2009) and The Dying Sahara (Pluto, 2013). He is a consultant to numerous international organisations on the Sahara and the Sahel, including the United Nations, the European Commission and many others.

'Compelling and persuasive. The writing is excellent and Keenan knows the region and its people extremely well' - Isaac Kfir, The Journal for Islamic Studies
1. P2OG: A Long History of False-Flag Terrorism
2. The US Invasion of the Sahara-Sahel
3. Repression and Terrorism Rents
4. Footing the Bill. Did the World Bank Fund State Terrorism?
5. Putting the GWOT Back on Track
6. New Tuareg Rebellions
7. Uranium Goes Critical: Why the Tuareg Took Up Arms
8. The Fifth Anniversary of 2003: Another Kidnap
9. The Creation of AFRICOM
10. The Future Ground Zero
11. Perfidious Albion: the Murder of Edwin Dyer
12. Drugs and the Threat of Western Intervention
13. Al Qaeda in the West for the West
14. ‘Washing the Mountain’. Desert Borders, Corruption and the DRS
15. Sarkozy Declares War on Al Qaeda
16. Opening the Gates of Hell
17. The Past Catches Up: Pressures on Algeria
18. The ‘Arab Spring’ and Gaddafi Intervene
19. War crime?
20. Preparing for the ‘Long War’
Notes
Index
Published by Pluto Press in Mar 2013
Paperback ISBN: 9780745329611
eBook ISBN: 9781849648271