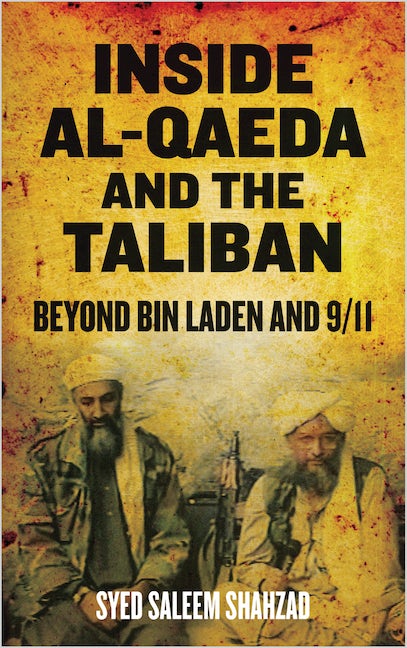 Inside Al-Qaeda and the Taliban

An insight into the post-Osama bin Laden generation of al-Qaeda and Taliban leaders
President Obama may have delivered on his campaign promise to kill Osama bin Laden, but as an Al-Qaeda strategist bin Laden has been dead for years. This book introduces and examines the new generation of Al-Qaeda leaders who have been behind the most recent attacks.

Investigative journalist Syed Saleem Shahzad dedicated his life to revealing the strategies and inner workings of Al-Qaeda and the Taliban. He had access to top-level commanders in both movements, as well as within the ISI, Pakistan's intelligence service. Shahzad's work was praised by US Secretary of State Hillary Clinton for 'bringing to light the troubles extremism poses to Pakistan's stability.' Inside Al-Qaeda and the Taliban explains the wider aims of both organisations and provides an essential analysis of major terrorist incidents, including the 2008 Mumbai attacks.

In May 2011, Shahzad was abducted and killed in Pakistan, days after writing an article suggesting that insiders in the Pakistani navy had colluded with Al-Qaeda in an attack on a naval air station. This book is a testament to his fearless reporting and analytical rigour. It will provide readers worldwide with an invaluable introduction to a new phase of the ongoing struggle against terrorism which threatens lives in so many countries.

Syed Saleem Shahzad (1970-2011) was an investigative reporter who worked as Pakistan Bureau Chief at Asia Times Online. He had been both a hostage and a guest of the Taliban, which gave him a unique insight into the organisation's internal structures. He was abducted and killed in Pakistan in May 2011. He left behind a wife and three children.

'A disturbing book. ... Shahzad considers the strategies of al-Qaeda and other radical Islamist movements in terms that are not often heard' - The Times, Iain Finlayson 'Buy Shahzad's book. It tells us what the Pakistani government, whose corruption and brutality Shahzad died to expose, does not want us to know' - Charles Glass, Taki's Magazine '[Shahzad's] work reporting on terrorism and intelligence issues in Pakistan brought to light the troubles extremism poses to Pakistan's stability' - Hillary Clinton, US Secretary of State 'When Syed Saleem Shahzad talks, I listen. He is the most fearless and reliable journalist covering Pakistan and Afghanistan, and that's why his work is read even in the halls of the Pentagon' - Nir Rosen, author of 'The Triumph of the Martyrs: A Reporter's Journey Into Occupied Iraq' 'Syed Saleem Shahzad has long been able to penetrate the Afghan and Pakistani Taliban organisations in a way that no other journalist has. His unique knowledge and contacts make his writing a 'must read' for anyone who wants to understand those movements' - Gareth Porter, historian and author of 'Perils of Dominance: Imbalance of Power and the Road to War in Vietnam' 'Whether it's insights into the plans and ideologues driving Al-Qaeda, the low-down on militants across the Hindu Kush, the Taliban-led Afghan insurgency or political wheeling and dealing, Syed Saleem Shahzad is always first on the trail' - Tony Allison, editor, Asia Times Online 'A path breaking book that enhances considerably our understanding of the complexities of Al-Qaeda' - Hameed Haroon, CEO, The Dawn Media Group, Pakistan
Preface
Prologue
1. A New World: Destruction, Migration, Friends and Foes
2. The Politics of War and Peace
3. First Step: Leadership Building and Transformation of ‘Son of the Soils’ to ‘Blood Brothers’.
4. Takfeer and Khuruj: An Ideological Thesis for the Separation of Islamists and States
5. Antithesis: Debate for the Legitimacy of the Resistance
6. The Synthesis
7. Building the Eagles’ Nest
8. The War Theatre
Epilogue
Notes
Index
Published by Pluto Press in May 2011
Paperback ISBN: 9780745331010
eBook ISBN: 9781783714360