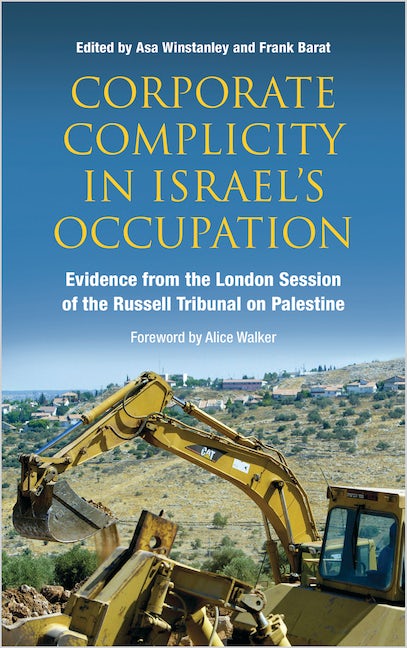 Evidence from the London Session of the Russell Tribunal on Palestine

Damning exposé of corporate complicity in Israel's illegal occupation of Palestinian land
The Russell Tribunal on Palestine is a people's tribunal in the spirit of the Tribunal on Vietnam that was set up by Bertrand Russell in the 1960s. This book contains a selection of the most vital evidence and testimonies presented at the London session. It includes the papers submitted to the tribunal, written by expert witnesses, based on their detailed research into the companies that prop-up Israeli occupation.

Examining the involvement of corporations in the illegal occupation of Palestinian land by Israel, the tribunal of 2010 generated widespread media coverage. The book identifies companies and corporations participating in such illegality and possibilities for legal action against them are discussed.

Released to coincide with the South Africa session at the end of 2011, Corporate Complicity in Israel's Occupation is a vital resource to lawyers, journalists and activists hoping to take informed action against Israeli war crimes and occupation.

Asa Winstanley is Associate Editor with The Electronic Intifada. He is the co-author of Corporate Complicity in Israel's Occupation (Pluto, 2011).

Frank Barat is a human rights activist and the coordinator of the Russell Tribunal on Palestine. He has written for Electronic Intifada, Counterpunch, Z Magazine, New Internationalist, Washington Report on Middle East Affairs and the Palestine Chronicle. He is the co-author of Corporate Complicity in Israel's Occupation (Pluto, 2011).

Alice Malsenior Tallulah-Kate Walker is an American novelist, short story writer, poet, and social activist. In 1982, she published the novel The Color Purple, for which she won the National Book Award for hardcover fiction, and the Pulitzer Prize for Fiction

'An important, practical tool in the non-violent struggle against apartheid in the Holy Land' - Archbishop Desmond Tutu, Nobel Peace Prize Laureate 'A compelling and urgent read for anyone concerned about corporate complicity in Israel's crimes against the Palestinian people' - Omar Bargouti, co-founder of the Palestinian Civil Society BDS Movement 'It is vitally important to pursue the complicity of any corporations which aid or abet human rights violations in any country in the world. The Russell Tribunal is to be commended for calling to account those who share responsibility for the continuing devastation of Gaza' - Julie Christie, actress, activist and patron of the Palestine Solidarity Campaign 'This excellent book presents compelling evidence of corporate complicity in Israel's violations of international law' - Mairead Maguire, Nobel Peace laureate 'Like the landmark Russell Tribunal on Vietnam, this examination of the forces that maintain the epic injustice in Palestine is timely and critically necessary' - John Pilger 'The Russell Tribunal on Palestine' brings together vital documentation for understanding how big business supports illegal Israeli practices. A very important book' - Ghada Karmi 'This Tribunal surely helps prevent the crime of silence in the pressing case of Palestine' - Tony Simpson, Bertrand Russell Peace Foundation 'A weapon for those who are compelled by human decency to mobilise solidarity in order to overcome one of the greatest injustices of modern times. It speaks out against the crime of silence - one of Bertrand Russell's immortal injunctions!' - Ronnie Kasrils, writer, activist, former South African government minister 'This report from the Russell Tribunal is essential reading. Many of the corporations that trade with Israel have manifestos and Human Rights commitments that, they claim, inform their business decisions. The Tribunal tests these claims and finds them wanting. We hope the shareholders and customers of these companies, whether individuals or institutions, will look at the conclusions of the Tribunal and demand that integrity replaces unprincipled greed' - Ken Loach 'The Russell Tribunal unpicks the tangled but systematic corporate collusion that cements it all together. Walls have a history of tumblin' down' - Paul Laverty, screenwriter
Foreword by Alice Walker
Introduction
1. The Legal Framework Relevant to Corporate Conduct
-International Law and the Complicity of Business in Human Rights Abuses -Hocine Ouazraf
-Redress for Palestinian Victims of Human Rights Abuses in the Courts of England and Wales -Richard Hermer QC
-Principles and Mechanisms to Hold Business Accountable in US Courts -Yasmine Gado
-The French Courts -William Bourdon
2. Corporate Activities In and Around Israeli Settlements
-The Settlement Industry and Corporate Involvement in the Occupation -Dalit Baum
-Business Practices in Relation to Settlements and the Settlement Industry -Hugh Lanning
-The Reality of Israeli Settlements in Palestine -Fayez al-Taneeb
-The Situation in the Jordan Valley -Wael Natheef
Veolia Environnement SA -Adri Nieuwhof
-The Actions of Cement Roadstone Holdings (CRH) in Israel/Palestine by John Dorman
3. Trade and Labelling of Israeli Settlement Goods
-Production and Trade of Settlement Produce: Unlawful Exploitation of Natural Resources in the Occupied Palestinian Territories by Salma Karmi-Ayyoub
-Agrexco Agricultural Export Ltd. by Christophe Perrin
-Ahava Dead Sea Products in Israel/Palestine by Nancy Kricorian and Rae Abileah
-Trade and Labelling of Settlement Goods by Phon Van Den Biesen
-SodaStream -Genevieve Coudrais
4. The Financial Services Sector
-The Israeli Financial Sector and the Occupation by Merav Amir
-The Financing of Israeli Settlements in the Occupied Territories by the Belgian-French Financial Group Dexia by Mario Franssen
-PFZW -The Case of a Pension Fund Complicit in International Law Violations by Saskia Müller
-War Profiteering and SWIFT Sanctions: A Civil Society Imperative -Terry Crawford-Browne
5. The Security Industry and the War Industry
-The Israeli Arms Trade and the Apparatus of Repression by John Hilary
-Caterillar's Involvement in the Occupied Palestinian Territories by Maria LaHood
-US Government Complicity in the Supply of Caterpillar Bulldozers to Israel by Josh Ruebner
-G4S and the Occupation by Merav Amir and Dalit Baum
-Elbit Systems by Shir Hever
-The Cases of EDO/ITT and Raytheon by Paul Troop
-The Campaign Against EDO/ITT by Chris Osmond
-European Union R&D Subsidies for Israeli Security Actors by Ben Hayes
6. Witness Recall
7 The Jury’s Findings
Afterword
Appendix 1 - Israeli Participation in the ESRP
Appendix 2 - Formal Responses from Companies
Notes
Index
Published by Pluto Press in Oct 2011
Paperback ISBN: 9780745331591