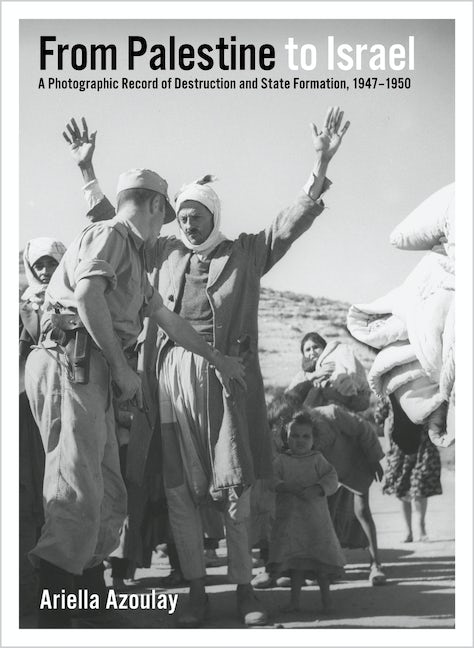 From Palestine to Israel

A Photographic Record of Destruction and State Formation, 1947-1950

The book reconstructs the processes by which the Palestinian majority in Mandatory Palestine became a minority in Israel, while the Jewish minority established a new political entity in which it became a majority ruling a minority Palestinian population. By reading over 200 photographs from that period, most of which were previously confined to Israeli state archives, Azoulay recounts the events and the stories that for years have been ignored or only partially acknowledged in Israel and the West.

Including substantial analytical text, this book will give activists, scholars and journalists a new perspective on the origins of the Palestine-Israel conflict.

Ariella Azoulay is Professor of Modern Culture and Media and the Department of Comparative Literature, Brown University. She is the author of From Palestine to Israel (Pluto, 2011), Civil Imagination (Verso, 2011), The Civil Contract of Photography (MIT Press, 2008), and Death's Showcase (MIT Press, 2003). She won the 2002 Infinity Award for Writing, presented by the International Center for Photography for excellence in the field of photography.

'From Palestine to Israel will confirm Azoulay's status as one of the politically boldest theorists at work in the field of visual studies today' - Jacqueline Rose 'A rare achievement. Truly interdisciplinary, she marshals material from photography, history and political theory to offer an incisive political critique of the discourses through which we understand Israel-Palestine. The result is the most original conceptualisation of photography, history and politics and their connections that we have seen for a very long time' - David Campbell, Durham Centre for Advanced Photography Studies 'Extracting photographs primarily from Israeli state archives -- in which they performed a Zionist role -- she breathes into them new life, looking at them as no one looked before and seeing the contours of a possible shared future ... A groundbreaking work of political imagination' - Eyal Weizman, Goldsmiths University Department of Visual Cultures, author of Hollow Land: Israel's Architecture of Occupation 'An extraordinary set of photographs, elucidated with brilliant and provocative captions that embody prodigious research. The result is a stunningly eloquent documentary record and analysis of the violence that accompanied the establishment of Israel in 1947-49' - Zachary Lockman, New York University 'This is a stunning book, fierce and subtle in its visual documentation of the early making of the Israeli regime. Ariella Azoulay does more than redefine what photography can be about. She offers us new methodological tools that probe the power of visual history. In insisting that we attend to “the photographic event” as much as the photographic document itself, she tracks the violences and transgressions that made possible this photograph, in this place, at this particular time. Instructing us with sharp political acuity, she rivets our senses on the political logics of a regime in the making that these photographs register, the absences they pronounce, the conceptual vocabulary they use, the potentialities of imagining a non-evitable course of events. Whether one draws on her analysis to gain a new understanding of the Israeli/Palestinian divide, or to learn how to write visual history differently, Azoulay's gift to us is to transform the political analytics of visual documentation and to broaden the scope of what tangible violences such images actually bear witness to.' - Ann Stoler, Willy Brandt Distinguished University Professor of Anthropology and Historical Studies, New School for Social Research 'The disappearance of the country of Palestine in 1948 was, predictably, accompanied by the disappearance of many people. This tragic time gave rise to desperate searches and also countless images. Long hidden away in archives, these images are finally beginning to emerge. Ariella Azoulay is one of the image seekers as those who sift through the riches of forgotten basement archives are called who for many years has helped to give new visibility to those who disappeared. This means, above all, that the truth of their stories can finally be told. In addition to [Azoulays] passionate work, this book makes a fundamental contribution to the truth needed to bring about a just and shared peace.' - Elias Sanbar, Palestinian Ambassador to UNESCO 'A very significant addition to the study of the Palestinian Nakba of 1948... It is a must-read for all those interested in the events surrounding the declaration of Israel's statehood.' - Issam Nassar, Journal of Palestine Studies
Introduction: Constituent Violence 1947–50
Acknowledgements
Bibliography
1. Military Governmentality
2. Socialisation to the State, and the Mechanisms
of Subordination
3. Architecture of Destruction, Dispossession
and Gaining Ownership
4. Creating a Jewish Political Body and Deporting
the Country’s Arab Residents
5. Borders, Strategies of Uprooting, and
Preventing Return
6. Looting, Monopolising and Expropriation
7. Observing 'Their Catastrophe'
Index
Published by Pluto Press in Oct 2011
Paperback ISBN: 9780745331690