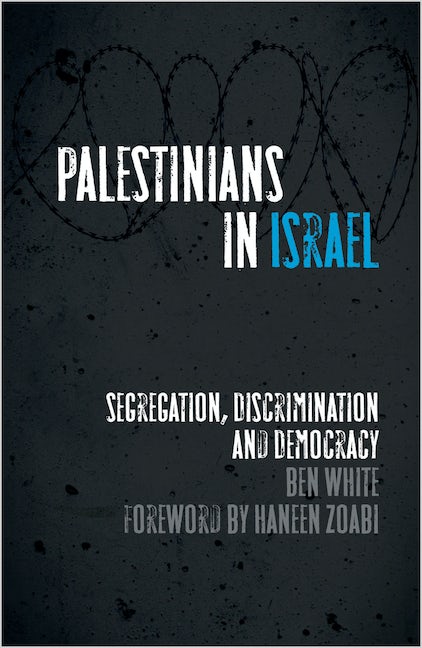 Israel's insistence on declaring itself a Jewish state leads to discrimination, segregation and a guarantee of continued conflict
Palestinians in Israel considers a key issue ignored by the official 'peace process' and most mainstream commentators: that of the growing Palestinian minority within Israel itself.

What the Israeli right-wing calls 'the demographic problem' Ben White identifies as 'the democratic problem' which goes to the heart of the conflict. Israel defines itself not as a state of its citizens, but as a Jewish state, despite the substantial and increasing Palestinian population. White demonstrates how the consistent emphasis on privileging one ethno-religious group over another cannot be seen as compatible with democratic values and that, unless addressed, will undermine any attempts to find a lasting peace.

Individual case studies are used to complement this deeply informed study into the great, unspoken contradiction of Israeli democracy. It is a pioneering contribution which will spark debate amongst all those concerned with a resolution to the Israel/Palestine conflict.

Haneen Zoabi is a member of the Knesset representing the Balad party. She is the first woman to be elected to the Knesset on an Arab party's list. She contributed the foreword to Palestinians in Israel (Pluto, 2011).

'This book debunks convincingly and forcefully the myth of Israel being 'the only democracy' in the Middle East' - Prof. Ilan Pappe, author of The Ethnic Cleansing of Palestine 'Essential reading to understand why there can never be peace unless Palestinian citizens of Israel are granted full equality' - li Abunimah, Co-founder of Electronic Intifada, author of 'One Country' (2007) 'A holistic view of the Palestine/Israel problem - then goes beyond it to point towards its only just and hopeful solution. A significant and timely contribution to the political discourse so necessary today' - Ahdaf Soueif, author of Booker Prize-shortlisted The Map of Love 'With surgical precision, a wealth of research and sharp analytical intellect, White astutely exposes the oxymoron inherent in the definition of Israel as a 'Jewish and democratic' state and presents a compelling case for holding Israel accountable for committing the crime of apartheid, as defined by the UN' - Omar Barghouti, human rights activist and author 'It is rare to find a book covering such a complex, crucial topic that states its case so succinctly, yet so comprehensively and eloquently' - Sally Bland, Jordan Times
List of maps, charts, and photographs
Acknowledgements
Foreword by MK Haneen Zoubi
Introduction
1. Jewish and Democratic?
2. The Land Regime
3. Judaisation and the Demographic Threat
4. Systematic Discrimination
5. Frustrating Democratic Change
6. Rethink to Reimagine
Appendix: 10 Facts about Palestinian Citizens in Israel
Notes
Select Bibliography
Index
Published by Pluto Press in Dec 2011
Paperback ISBN: 9780745332284
eBook ISBN: 9781849646260

END_OF_DOCUMENT_TOKEN_TO_BE_REPLACED
Back to Top
X