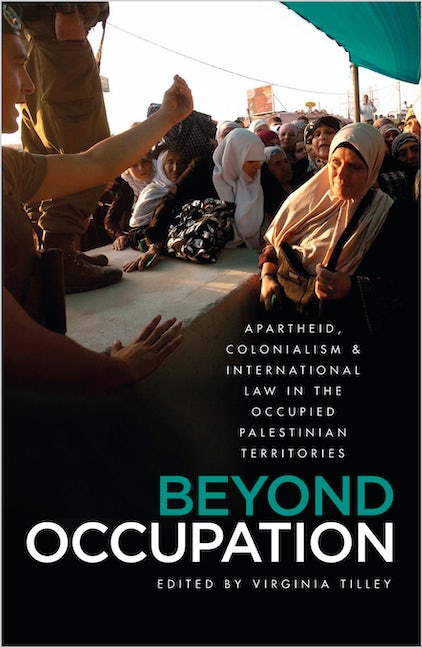 Apartheid, Colonialism and International Law in the Occupied Palestinian Territories

A damning analysis of Israel's evasion of international law
Is Israel following international law? This collection looks at three contentious terms that arise in contemporary arguments about Israel's practices towards Palestinians – occupation, colonialism and apartheid, and how they are manipulated by the Israeli state.

These essays present conclusive evidence that Israel’s administration of the Palestinian territories is consistent with colonialism and apartheid. Moreover, these practices are deliberate Israeli state policies, which are imposed on the Palestinian population under military occupation.

Beyond Occupation raises serious implications for the legality and legitimacy of Israel's continuing occupation, highlighting the responsibility of the entire international community.

Virginia Tilley is Director of the Governance Programme at the University of the South Pacific, Fiji. She has researched and published on the Israeli-Palestinian conflict since the 1980s and is the author of The One-State Solution (2005).

'This compelling study, by reputable legal scholars, answers the international community's need for new analytical tools to understand a conflict that defies conventional legal categories' - George Bisharat, Professor of Law, University of California Hastings College of the Law 'An excellent and very full study that examines in great detail the legal concepts of colonialism and apartheid, and considers their implications in the context of the Occupied Palestinian Territories' - Christine Chinkin, Professor of International Law, London School of Economics and Political Science 'Like many fellow South Africans, while visiting the occupied Palestinian territories I've been shocked to see Israel following or even exceeding the oppressive practices of the apartheid regime that we fought for decades. This study confirmed my worst impressions, and I believe its findings should receive urgent attention' - Ronnie Kasrils, former Minister of Intelligence Services, Republic of South Africa 'This study examines the increasingly frequent assertion that Israel is practising apartheid in the Occupied Palestinian Territory within the normative framework of contemporary international law. Its conclusion, based on a careful analysis of law and practices in apartheid South Africa and in the Occupied Palestinian Territory, reveals a new and troubling dimension of a conflict that has long confronted the international community' - John Dugard, Professor of Law at Leiden University and former Special Rapporteur for the UN Human Rights Committee on the situation in occupied Palestinian territory
Preface
1. Sources Of Law And Key Concepts
2. The Legal Context In the Occupied Palestinian Territories
3. Review of Israeli Practices Relative to the Prohibition of Colonialism
4. Review of Israeli Practices Relative to the Prohibition of Apartheid
5. Conclusion — Legal Implications
Notes
Index
Published by Pluto Press in Sep 2012
Paperback ISBN: 9780745332352
eBook ISBN: 9781849647441