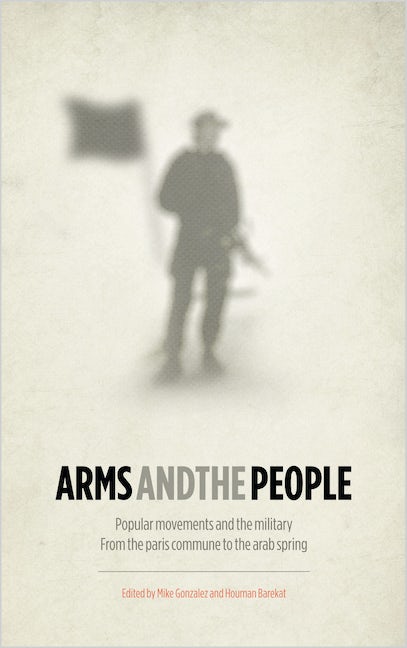 Arms and the People

Arms and the People explores the impact of social extremes on the solidarity within the state’s military, and on the changing loyalties of these soldiers. The authors examine a series of historical moments in which a crisis in the military has reflected deep instability in the wider world, including Russia in 1917, Egypt during the Arab Spring, the Paris Commune, as well as long-standing instability in Venezuela and Indonesia, amongst many others.

Including a range of international authors who have either studied or been directly involved in such social upheavals, Arms and the People is a pioneering contribution to the study of revolutionary change.

Houman Barekat is a literary critic and founding editor of Review 31. His writing has appeared in Guardian, New Statesman, Financial Times, Irish Times, Tribune and New Internationalist. He is co-editor, with Robert Barry and David Winters, of The Digital Critic: Literary Culture Online (OR Books, 2018).

'A most revealing study of some of the most dramatic moments of modern history' - Noam Chomsky 'These engaged case studies from some 150 years represent a very welcome review of both the popular armed struggle and the institutions of state violence' - James Dunkerley, Professor of Politics at Queen Mary, University of London, and the former Director of the Institute for the Study of the Americas.
Introduction
Soldiers and Revolution
1. Soldiers, Sailors and Revolution: Russia 1917 by Mike Haynes
2. An Army in Revolt: Germany 1918-19 by Volkard Moser
3. Nation against Nation: Italy 1919-21 by Megan Trudell
4. Soldiers on the Side of the People: Portugal 1974 by Peter Robinson
The Popular Forces Mobilise
5. Militia and Workers’ State: Paris 1871 by Donny Gluckstein
6. The People in Arms: Spain 1936 by Andy Durgan
7. Never ‘One Hand’: Egypt 2011 by Philip Marfleet
Guerrilla Wars and the Limits of Imperial Power
8. People Change: American Solidiers and Marines in Vietnam by Jonathan Neale
9. Crazy Little Armies: Guerrilla Strategy in Latin America, 1958 - 1990 by Mike Gonzalez
Counter-Revolution and the Military
10. The Iron Fist: Chile 1973 by Mike Gonzalez
11. Reaction and Slaughter: Indonesia 1965-66 by Nathaniel Mehr
The Civic-Military Alliance
12. Storming the Ramparts of Tyranny: Egypt & Iraq 1945-63 by Anne Alexander
13. The Civic-Military Alliance: Venezuela 1958-1990 by Douglas Bravo & Mike Gonzalez
Index
Published by Pluto Press in Dec 2012
Paperback ISBN: 9780745332970
eBook ISBN: 9781849648103