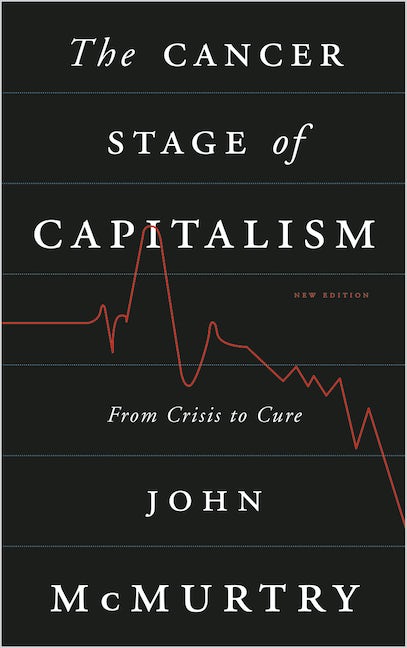 The Cancer Stage of Capitalism

From Crisis to Cure

New edition of a modern classic of critical philosophy, political economy and anti-capitalism.
The Cancer Stage of Capitalism is a modern classic of critical philosophy and political economy, renowned for its depth and comprehensive research. It provides a step-by-step diagnosis of the continuing economic collapse in the US and Europe and has had an enormous influence on new visions of economic alternatives.

John McMurtry argues that our world disorder of unending crises is the predictable result of a cancerous economic system multiplying out of all control and destroying ecological, social and organic life - a process he describes as 'global ecogenocide'. In this updated edition he explains the 'social immune response' required to fight this cancer, prescribing developments akin to the Occupy movement and the 'Pink Tide' democratic social transformation occurring in Latin America.

In a global cultural orthodoxy that is increasingly hostile to life, this book shows the necessity and possibility of building a sustainable society based on a universal commitment to nature and humanity.

John McMurtry is Professor of Philosophy at the University of Guelph and a Fellow of the Royal Society of Canada. He is the author of the multi-volume Philosophy and World Problems, written for the UNESCO Encyclopaedia of Life Support Systems, Value Wars (Pluto, 2002) and The Cancer Stage of Capitalism (Pluto, 2013).

'McMurtry's vision is a panoramic, encyclopedic, and breathtakingly original one, imbued with both high reason and (com)passion' - Professor Rajani K. Kanth, Fellow, Harvard University 'Any entity that defines itself through exponential growth, be it a cancer tumour, the financial system or a runaway nuclear reaction, can only have one outcome: catastrophic failure with the sole chance of survival being the recognition of and response to the disorder. McMurtry provides both the diagnosis and antidote for this current state of our world' - Marcel Schlaf, Professor of Chemistry, University of Guelph 'McMurtry's profound analysis of the consequences of the unrestrained and relentless pursuit of profits should be a source of grave concern for everyone who cares about the survival and reproduction of the species' - James Fetzer, Distinguished McKnight University Professor Emeritus, Philosophy of Science, University of Minnesota Duluth 'This new edition confirms McMurtry's place as the foremost social philosopher of our time. The revised Cancer Stage of Capitalism lays bare, in even more detail than the original, the structural causes of global life-crises' - Jeff Noonan, Professor of Philosophy, University of Windsor 'Confronts and resolves the ultimate issue of our time - world survival. The real economy is being consumed by the global corporate cancer system at every level. Survival depends on understanding McMurtry's classic analysis and acting on it' - Stephen Lendman, award-winning investigative journalist and author of How Wall Street Fleeces America 'Once again, McMurtry is ten years ahead of everyone else' - Giorgio Baruchello, Professor of Philosophy and Social Sciences, University of Akureyri, and Editor of Nordicum-Mediterraneum 'John McMurtry's work has woken us up, inspired us, and motivated us to connect our struggle for the life-ground and the civil commons' - Wahu Kaara, Executive Director, Kenya Debt Relief Network (KENDREN); African Social Forum 'With a sharp scalpel, John McMurtry reveals the carcinogenic money sequences invading and threatening human life and our planetary host' - Howard Woodhouse, Professor of Educational Foundations and Co-Director, University of Saskatchewan Process Philosophy Research Unit, author of Selling Out: Academic Freedom and the Corporate Market (2010) 'Few dare to recognise what this work diagnoses in depth - a self-multiplying money-sequence cancer metastasising across the world. But as a physician this work provides basic concepts of human health which free me from the malignant paradigm to guide my practice' - Dr. Allan Connolly, (Past) President of Physicians for Prevention of Nuclear War 'McMurtry's analysis is brilliant, original, prescient, profound, and just plain right. Now revised and updated, it is more powerful than ever' - Joel Bakan, author of The Corporation: The Pathological Pursuit of Profit and Power and Childhood Under Siege: How Big Business Targets Children, Professor of Law, University of British Columbia
1. Decoding the Cancer System and Its Resolution
2. The Ancient Taboo
3. The Pathologisation of the Free Market
4. The Social Immune System and the Cancer Stage of Capitalism
5. The Life Code versus the Money code: The Paradigm Shift
6. The Great Vehicle of the Civil Commons
Notes
Index
Published by Pluto Press in Jul 2013
Paperback ISBN: 9780745333137
eBook ISBN: 9781849648042