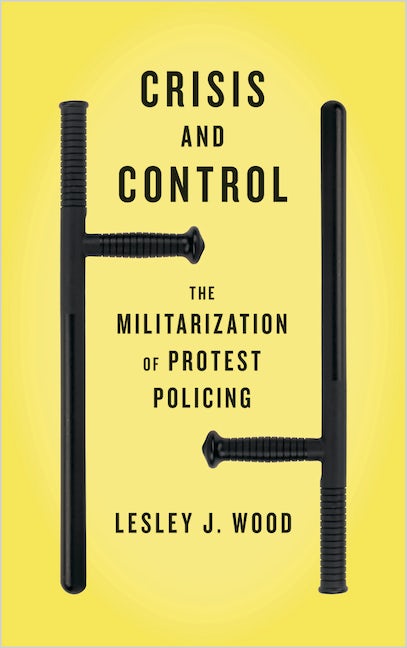 The Militarization of Protest Policing

An activist's guide to understanding the militarisation of the policing of protest.

Crisis and Control explains how neoliberal transformations of political and economic systems are militarising the policing of protest, based on a compelling empirical study of police agencies and practices from 1995 until the present.

Lesley J. Wood shows that the increasing role of the security and defense industries, professional police associations, anti-terrorism initiatives and 'best practices' in policing networks have accelerated the use of less lethal weapons, pre-emptive arrests, infiltration and barricading strategies against protesters.

The book uses Bourdieu and Boltanski to analyse court transcripts, police reports, policy, training materials and the conference programs of professional police organisations to argue that police agencies are neither omnipotent strategists, nor simple tools of the elite, but institutions struggling to maintain legitimacy, resources and autonomy in a changing field.

Lesley Wood is Associate Professor of Sociology at York University in Toronto, Canada. She is the author of Crisis and Control (Pluto, 2014), Direct Action, Deliberation and Diffusion (2012) and co-author of the third edition of Social Movements 1768-2012 (Pluto, 2012). She is an activist in the global justice and anti-poverty movements.

'A balanced, detailed and convincing look at global policing. This is a necessary and rare account that is vital for anyone interested in protest policing and its increasing militarisation, as well as wider forms of global social control under neo-liberalism' - Nina Power, University of Roehampton, co-founder of Defend the Right to Protest

'Sheds light on the economic and political roots of police brutality against legitimate social movements. Unfortunately, this is what our 'democracy' looks like' - Francis Dupuis-Déri, professor of political science, Université du Québec à Montréal, and member of the Observatory on racial, social, and political profiling in the public space.

'An engaging and sophisticated study of protest policing, which exposes the threat such policing poses to democracy and the neoliberal dynamics that have made it a preferred strategy for repressing the 99% whenever they challenge the 1%' - William K. Carroll, professor of sociology, University of Victoria

'Shows clearly that the police wing of the state takes very seriously its task of understanding and defeating social resistance to austerity. Those engaged in that resistance would do well to return the favour. This book provides an excellent source of knowledge and insight into how the not-so-thin blue line thinks and operates' - John Clarke, Organizer, Ontario Coalition Against Poverty

'A must-read for all who care about freedom of speech and see protest and public demonstration as a necessary and legitimate means of protecting democracy'<br> - Howard F Morton. QC., Barrister

END_OF_DOCUMENT_TOKEN_TO_BE_REPLACED
Back to Top
X