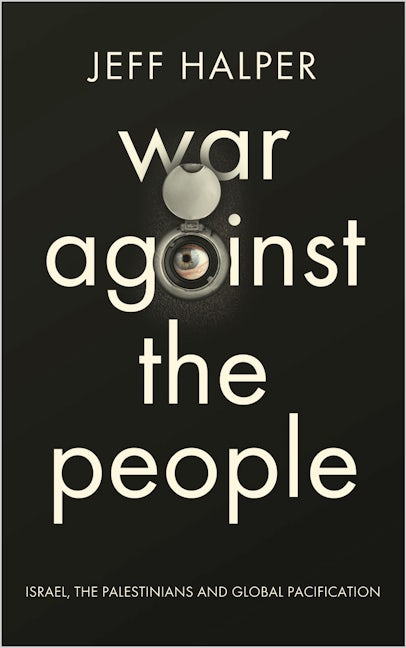 War Against the People

Israel, the Palestinians and Global Pacification

A disturbing insight into the new phenomenon of the 'securocratic' war in the modern policed world, with a focus on the Israeli state.

Modern warfare has a new form. The days of international combat are fading. So how do major world powers maintain control over their people today?

This book is a disturbing insight into the new ways world powers such as the US, Israel, Britain and China forge war today. It is a subliminal war of surveillance and whitewashed terror, conducted through new, high-tech military apparatuses, designed and first used in Israel against the Palestinian population. Including nano-technology, hidden camera systems, information databases on civilian activity, automated targeting systems and unmanned drones, it is used to control the very people the nation's leaders profess to serve.

Jeff Halper reveals that this practice is much more insidious than was previously thought. As Western governments claw back individual liberties, War Against the People is a reminder that fundamental human rights are being compromised for vast sections of the world, and that this is a subject that should concern everyone.

'This is an important book for anyone who cares about peace, the plight of the Palestinian people and the role of Israel in the world of war. Halper's fascinating book places the Israeli occupation of the Palestinian territories at the heart of its role in the transnational military industrial complex and what he calls the pacification industry. A brave, analytical and innovative book from an admirable activist and thinker'

'War Against the People is not only a key to deciphering Israeli policies in Palestine, but also one of the clearest explanations that I have ever read on how important Israel/Palestine is in the world. It addresses with clarity and structure one of the most complex and yet extremely important topics of the securitisation of our society. His book has opened my eyes, and was a fascinating read'

- Shir Hever, author of The Political Economy of Israel's Occupation

'Halper's essay on Israel's 'matrix of control' is classic, even canonical. Now, in War Against the People, he radicalises the argument to develop a deeply disturbing vision of what he calls 'securocratic wars in global battlespace'... a rare combination of theoretical imagination, empirical sensitivity and political passion'

'In this cogently written and extremely informative book, Jeff Halper explores Israel's key role in the 'global pacification industry'. The resulting alliances not only enable Israel to perpetuate the occupation of the West Bank and Gaza Strip; the latter's function as a human laboratory for Israel's 'matrix of control' additionally make the occupation indispensable to Israel's security industry and global positioning. War Against the People is an excellent, revealing and accessible examination of Israel's 'security politics' and the changing nature of pacification worldwide in the twenty-first century'

- Mouin Rabbani, Senior Fellow with the Institute for Palestine Studies and co-editor of Jadaliyya

'A brilliant book whose depth of political insight is driven by the spirit of one of the world's most inspiring political activists. It lays out the way in which Israel's war on the Palestinians has become both a model and the laboratory for a global war against the people'

- Eyal Weizman, Professor of Visual and Spatial Cultures and Director of the Centre for Research Architecture at Goldsmiths, University of London

'This profoundly important and well-researched study serves as a reminder that US-backed Israeli militarism and its devastating humanitarian impact is neither unique nor can it be seen in isolation. Halper convincingly argues that it is part of an even more disturbing global phenomenon that goes well beyond Israel and which threatens the lives and civil liberties not just of Palestinians, but of people around the world'

'A must-read, a major contribution to the subject'

List of Figures and Tables
Acronyms
Introduction: How Does Israel Get Away With It?
Part I: The Global Pacification Industry
1. Enforcing Hegemony: Securocratic Wars in Global Battlespace
Part II: A Pivotal Israel
2. Why Israel? The Thrust into Global Involvement
3. Niche-Filling in a Global Matrix of Control
Part III: Weaponry of Hybrid Warfare and Securocratic Control (Niche 1)
4. The Israeli Arms and Security Industry
5. Dominant Maneuver
6. Precision Engagement
Part IV: The Securocratic Dimension: A Model of 'Sufficient Pacification' (Niche 2)
7. Israel's Matrix of Control
8. Operational Doctrines and Tactics
Part V: Managing Hegemony throughout the World-System
9. Serving the Hegemons on the Peripheries: The 'Near' Periphery
10. Security Politics on the 'Far' Periphery
11. The Private Sector
Part VI: Domestic Securitization and Policing
12. Serving the Core’s Ruling Classes 'At Home'
Conclusions: Challenging Hegemony and Resisting Pacification
Notes
Online Resources
Index