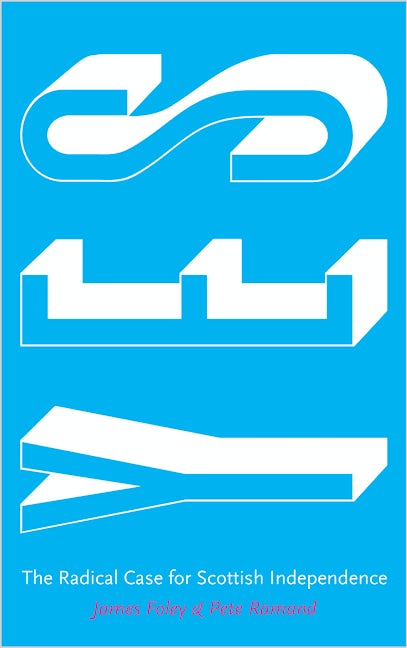 The Radical Case for Scottish Independence

by James Foley and Peter Ramand

An urgent and compelling argument for a 'Yes' vote on Scottish Independence, from a radical left perspective.
The United Kingdom faces a historic turning point in 2014. A 'Yes' vote in the referendum on Scottish independence would see the break-up of the 300-year-old union, adding a constitutional crisis to a deep economic crisis.

An accessible polemic written for progressives both north and south of the border, Yes argues that independence can reinvigorate campaigns against austerity across Britain and deal a blow to the imperialist ambitions of the British state.

An urgent and invigorating political intervention, Yes argues that even if the referendum result is 'no', a progressive independence campaign will alter the political landscape. Written by leading activists from the Radical Independence Campaign, Yes will be a unique contribution to the referendum debate.

James Foley is a founding member of the Radical Independence Campaign. He is that author of Yes: The Radical Case for Scottish Independence (Pluto, 2014).

Pete Ramand is a founding member of the Radical Independence Campaign. He is that author of Yes: The Radical Case for Scottish Independence (Pluto, 2014).

'A vital contribution to the debate, showing what independence can bring to Scotland and how vital it can be for all of us' - Stuart Braithwaite, Mogwai guitarist 'Strongest in its critique of the UK political and economic settlement' - Gerry Hassan, writer, academic and author of 'Caledonian Dreaming: The Quest for a Different Scotland' 'There is a growing body of evidence to suggest that independence is Scotland's chance to break from the neoliberal consensus. This book puts forward that case in a lucid and accessible manner, and is essential reading for all of us that associate with a radical vision of an empowered, better Scotland' - Jean Urquhart, MSP 'The constitutional debate in Scotland has brought to the fore a new generation of young Scottish activists, writers and thinkers, the authors of this book among them. It is greatly encouraging for our future to hear these fresh voices and the quality and depth of the analysis they bring' - Robin McAlpine, editor of Scottish Left Review, director at Jimmy Reid Foundation, author of 'No Idea: Control, Liberation and the Social Imagination' (2005) 'Another Scotland is not only possible, but increasingly probable. If you don't believe that - read this book. If you want to believe it and don't know how an independent Scotland could work - read this book. If you want to be inspired - read this book' - Bernadette McAliskey, former republican MP 'Deserves to turn the referendum campaign on its head. It convincingly makes the case that the real risks for the people of Scotland lie in continuing to be part of the UK. In the process, it exposes how the 'Yes' campaign has fundamentally weakened its position by implicitly accepting that change for Scotland equals danger' - Jim and Margaret Cuthbert, economists 'Non-nationalist arguments for Scottish independence have been all too rare in the current debates about the nation's future. We should be grateful then that James Foley and Pete Ramand have written a book which puts the case squarely in terms of the crisis of British capitalism, neoliberalism, and the struggle for social justice' - Neil Davidson, University of Glasgow, author of Discovering the Scottish Revolution 'The push for independence is the most powerful grassroots movement Scotland has ever seen and this book constitutes its gleaming edge. Clear, lucid, and under no illusions about either the British state or the SNP, it details where the points on the moral compass must now fall. A new, transformative path for ordinary Scots lies within these pages, if we can but trust ourselves to walk it' - Alan Bissett, author and playwright 'The product of a youthful, dynamic and energising movement in Scotland that has successfully filled the vacuum created by traditional party political defined debates' - Ailsa McKay, Professor of Economics, Glasgow Caledonian University 'The independence referendum is about more than Scotland. It is a vote on British nationalism, forged by Empire. Foley and Ramand vividly argue for a new beginning and set out their vision of a radically different, independent Scotland' - Niki Seth Smith, OpenDemocracy
List of Figures
Acknowledgements
Introduction
1. Endgame Britain? The Four Crises of 'Anglobalisation'
2. British Nationalism: The Missing Link
3. Caledonia PLC: Capitalist Power in Scotland
4. Alliances and Divisions: Scottish Politics in the Holyrood Era
5. Yes We Can, but We Need to Change: Strategy and 2014
6. Scotland vs the Twenty-First Century: Towards a Radical Needs Agenda
Afterword: After the White Paper, After Britain
Notes
Published by Pluto Press in Mar 2014
Paperback ISBN: 9780745334752
eBook ISBN: 9781783711338