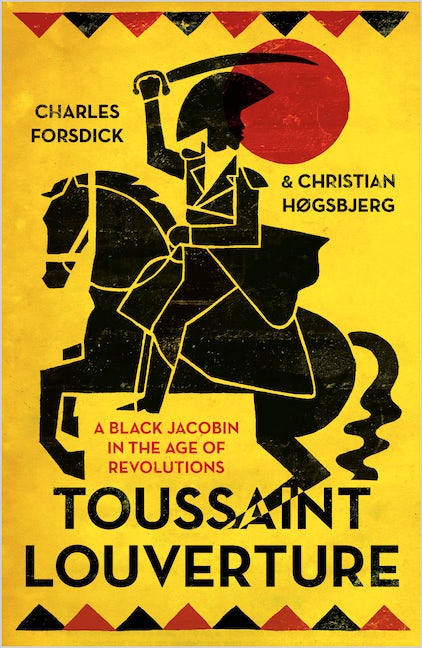 by Charles Forsdick and Christian Hogsbjerg

Biography of the anti-imperialist fighter and slave liberator Toussaint Louverture, explored through the prism of his radical politics
'In overthrowing me, you have done no more than cut down the trunk of the tree of liberty - it will spring back from the roots, for they are numerous and deep.'

The leader of the only successful slave revolt in history, Toussaint Louverture is seen by many to be one of the greatest anti-imperialist fighters who ever lived. Born into slavery on a Caribbean plantation, he was able to break from his bondage to lead an army of freed African slaves to victory against the professional armies of France, Spain and Britain in the Haitian Revolution of 1791-1804.

In this biography, Louverture's fascinating life is explored through the prism of his radical politics. It champions this 'black Robespierre' whose revolutionary legacy had inspired people and movements in the two centuries since his death.

For anyone interested in the roots of modern-day resistance movements and black political radicalism, Louverture's extraordinary life provides the perfect starting point.

Charles Forsdick is James Barrow Professor of French, University of Liverpool. He is co-author of Toussaint Louverture (Pluto, 2017), author of Victor Segalen and the Aesthetics of Diversity and Travel in Twentieth-Century French and Francophone Cultures (Oxford University Press 2005) and co-editor of The Black Jacobins Reader (Duke University Press, 2017).

Christian Hogsbjerg is a historian who works for the Centre for African Studies at the University of Leeds. He is author of C.L.R. James in Imperial Britain (Duke University Press, 2014), co-author of Toussaint Louverture (Pluto, 2017) and editor of Toussaint Louverture: The Story of the Only Successful Slave Revolt in History, James's 1934 play about the Haitian Revolution, and World Revolution 1917-1936, James's 1937 history of the Communist International and co-editor of The Black Jacobins Reader (Duke University Press, 2017).

'A spirited, nuanced profile of this great revolutionary leader. The book provides a fascinating analysis of the range of reactions to Toussaint, from Wordsworth in 1802 to contemporary comic books and rap' - Alyssa Sepinwall, Professor of History, California State University San Marcos 'Documents his political life while mapping one stage of the dual revolution, presenting Toussaint as a black Jacobin revolutionary. An important text' - Anthony Bogues, Asa Messer Professor of Humanities and Critical Theory, Brown University
Illustrations
Acknowledgements
Introduction
1. Toussaint Unchained: c.1743-91
2. Making an Opening to Liberty: 1791-93
3. Black Jacobin Ascending: 1793-98
4. The Black Robespierre: 1798-1802
5. The Harder They Come, The Harder They Fall...: 1801-03
6. ...One and All: 1804-
Notes
Index

Chaplin and the Soviets: Comic Anti-Humanism

An extract from Owen Hatherley’s The Chaplin Machine: A History of the Communist Avant-Garde, examining Soviet Russia’s improbable fascination with Hollywood’s stars.

Reflections on the Haitian Revolution

From 1791 to 1917 and looking to the work of Trotsky and C.L.R. James, Christian Høgsbjerg examines the Haitian Revolution, the only successful slave revolt in history, in light of the centenary of the Russian Revolution.

END_OF_DOCUMENT_TOKEN_TO_BE_REPLACED
Back to Top
X