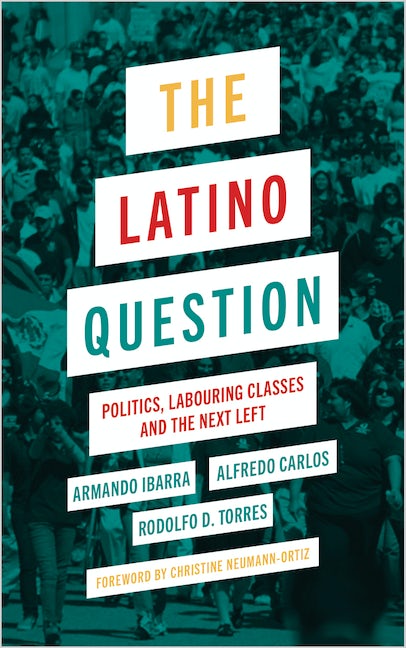 Politics, Labouring Classes and the Next Left

How Latino communities are transforming the politics of race, migration and labour in the US.

While so many Latino/Chicano Americans struggle in pursuit of the 'American dream', while figures such as Donald Trump are accepted in mainstream politics, and scaremongering and paranoia is rife, the need for a vivid, empirically grounded study on Latino politics, culture and society has never been greater.

The Latino Question fulfils this need, offering a cutting-edge analysis of the transformative nature of Latino politics in the US. In a radical alternative to dominant ideas, the authors emphasise the importance of political economy for understanding Latino politics, culture and social issues. It draws from original research and a number of critical traditions including the thought of Karl Marx and Antonio Gramsci, to understand the politics of race and ethnicity in a modern capitalist society.

Including case studies of how Latino/Chicano communities across the US are not only resisting, but also reinventing and transforming ethnic politics in the age of neoliberalism, this book is required reading for all those hoping to understand the 'Latino question' in contemporary America.

Armando Ibarra is an Associate Professor in the School for Workers at the University of Wisconsin, Madison. He is the co-author of The Latino Question (Pluto, 2018) and co-editor of Man of Fire: Selected Writings of Ernesto Galarza (University of Illinois Press, 2013).

Alfredo Carlos is a Faculty Member in Political Science at California State University, Long Beach. He is also the Executive Director of the Foundation for Economic Democracy. His articles have appeared in Latin American Perspectives and Ethnicities. He is the co-author of The Latino Question (Pluto, 2018).

Rodolfo D. Torres is Professor of Urban Planning and Public Policy and Director of the Latino Urban Theory Lab at the University of California, Irvine. He is the co-author of The Latino Question (Pluto, 2018), amongst many other works.

Christine Neumann-Ortiz is the founding Executive Director of Voces de la Frontera, a low-wage and immigrant workers centre, and serves on the board of a national coalition of the Fair Immigration Reform Movement, the Wisconsin Legalization Coalition, Wisconsin Citizen Action board and Interfaith Committee for Worker Justice board.

'A provocative book ... a timely intervention on Mexican American politics and labour'

'This is a remarkable analysis of Latino politics and labour in this period of market-driven madness and unruly democracy ... a compelling critique of our political economy as well as offering us democratic alternatives'

'Studies of Latino politics in the past have largely failed to locate their discussions in the context of the American capitalist political economy and the class divisions that it fosters and that shape so much of the country's political and cultural struggles. The Latino Question provides a pathbreaking and extraordinary account of contemporary Latino politics'

- Mario Barrera, Professor Emeritus, University of California, Berkeley and author of Race and Class in the Southwest (1979).

'This is a necessary book in these political times. Well researched and clearly written it exposes the problems and possibilities emergent when engaging and understanding the intersection of Latino politics in the American context. Rich in description and analysis the authors offer a lasting reminder that there is much and overlooked diversity amongst, across and within the matrix political category whose shorthand has too often been reduced to the word 'Latino' '