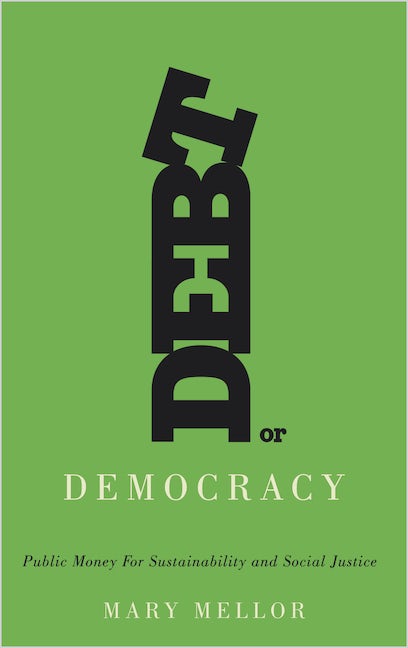 A clear case for the common ownership of money as a solution to the financial crisis
This is a challenge to conventional thinking around money and the 'debt crisis'. By re-evaluating the source of money, Mary Mellor presents a radical alternative to austerity and privatisation: public wealth, or, money used for sustainability, sufficiency and social justice.

Debt or Democracy debunks the received lessons of the financial crisis of 2007. Political elites shout about a house whose finances are in disarray; a 'yawning deficit' created by reckless spending in a bloated public sector. The answer to this 'debt crisis' has been harsh austerity measures - but this is a dangerously deceptive discourse.

Turning against the prevalent narrative, with its language of 'debt' and 'deficit', Mellor takes on the familiar question - 'where does money come from?'. The real solution is a return to the notion of public wealth and the public economy; of a monetary system owned by, and operated in the interests of, the majority.

'Mary Mellor has a superb understanding of the nature of money; of the institutions that underpin our monetary system, and of the economic frameworks within which monetary systems operate' - Ann Pettifor, analyst of the global financial system, author of Just Money: How Society Can Break the Despotic Power of Finance and Director of Policy Research in Macroeconomics (PRIME) 'Demonstrates the need to change the way in which money is created, in order to stop the private sector undermining the public sector and enable a shift to an economy that is environmentally sustainable and socially just. Fresh, clear and incisive' - Andrew Sayer, Professor of Social Theory and Political Economy at Lancaster University 'Prospering without growth requires reclaiming the creation of money from private banks. Now that even the likes of the IMF and the Bank of England entertain the idea of public money, how money is to be made public is as important as ever. And Mary Mellor's book has the right answers' - Giorgos Kallis, ICREA Professor, ICTA, Autonomous University of Barcelona and Leverhulme Visiting Professor, SOAS 'An insightful and thought-provoking analysis. This book clearly shows why a monetary system based on debt inevitably leads to crisis' - Ben Dyson, Positive Money 'Original and thought-provoking ... This well-researched study will interest anyone wanting to understand our current economic problems in order to take further action' - Peace News 'Debt or Democracy will surely enhance her reputation as a radical socialist academic' - Socialist Review 'This book deserves to be widely read and deeply considered ... I heartily recommend this book' - Peace News
Introduction
1. The Privatisation of Money and the Politics of Austerity
2. Money for Sustainability, Sufficiency and Social Justice
3. Provisioning through Public Money
4. Misunderstanding Public Money: Four Myths and a Confusion
5. Janus-faced: The Central Bank
6. Understanding Public Money
7. Public Money: Beyond the Borders
8. Conclusion: Crisis and Change
Bibliography
Index
Published by Pluto Press in Nov 2015
Paperback ISBN: 9780745335544
eBook ISBN: 9781783717187