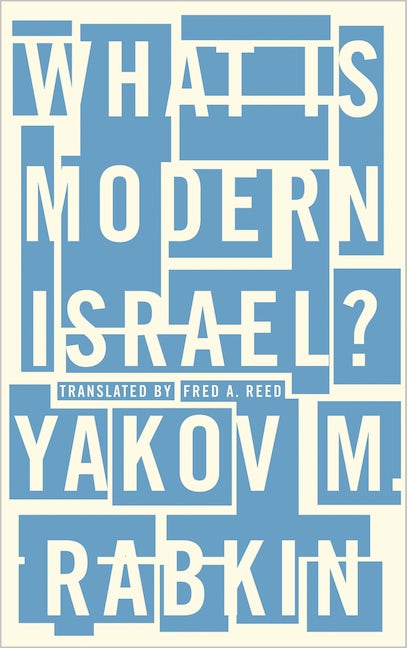 What is Modern Israel?

Shows that Zionism was conceived as a sharp break with Judaism and Jewish continuity.
Few countries provoke as much passion and controversy as Israel. What is Modern Israel? convincingly demonstrates that its founding ideology - Zionism - is anything but a simple reaction to antisemitism. Dispelling the notion that every Jew is a Zionist and therefore a natural advocate for the state of Israel, Yakov Rabkin points to the Protestant roots of Zionism, in order to explain the particular support Israel musters in the United States.

Drawing on many overlooked pages of history, including English, French, Hebrew, Yiddish and Russian sources, Yakov Rabkin shows that Zionism was conceived as a sharp break with Judaism and Jewish continuity. Israel’s past and present must be seen in the context of European ethnic nationalism, colonial expansion and geopolitical interests, rather than as an incarnation of Biblical prophecies or a culmination of Jewish history.

Yakov M. Rabkin is Professor of History at the University of Montreal, Canada. His is the author of What is Modern Israel? (Pluto, 2016) and A Threat from Within: A Century of Jewish Opposition to Zionism (Zed Books, 2006), amongst other works.

'Those who believe that Zionism is a sequel of Judaism may do well to read this book; those who believe that Israel is a Jewish state must read it' - Professor Shlomo Sand, Tel Aviv University, author of The Invention of the Jewish People (Verso, 2010) 'A valuable contribution to the badly needed debate about Israel's past, present and future' - Professor Joseph Agassi, Tel Aviv University, author of Liberal Nationalism for Israel (Gefen, 1999) '[A] work of impressive scope and great precision' - Edgar Morin, UNESCO Chair of Complex Thought, founding member of the International Ethical, Scientific and Political Collegium, Paris, author of Le monde moderne et la question juive (Seuil, 2006) 'A major contribution to our understanding of Israel. The author is a man of ethical and moral principles, and at the same time an historian of great calibre' - Professor Georges Corm, Saint Joseph University, Beirut, former Minister of Finance, author of A History of the Middle East (Garnet, 2009) 'Convincingly and thoughtfully, the author analyses current political and religious trends in Israeli society. A remarkable accomplishment: to tell a complex story with such clarity and punch' - Gregory Baum, Officer of the Order of Canada, Centre for Justice and Faith, author of Nationalism, Religion and Ethics (McGill-Queen's University Press, 2001) 'Erudite and attentive to detail, full of surprises even for those familiar with the subject, and at the same time easily accessible because written in a simple and direct language. Even though it is meticulously referenced, this book reads like a novel and fills an important gap in the extensive literature on Israel and Palestine' - Dr. Rev. Pierre Goldberger, former Principal of the Theological College of the United Church of Canada 'A key text in the search for a sustainable and just approach to the future of Israel and Palestine, and should be read and reflected upon by anyone concerned with the well-being of these two peoples' - Richard Falk, former UN Special Rapporteur on Human Rights, author of Palestine: The Legitimacy of Hope (Just World, 2014) 'Insightful and useful to all concerned about the future of Israel' - Ronnie Kasrils, former Minister of Intelligence Services, South Africa 'A precise and empathic account that will benefit all involved. A must-read' - Professor Gil Anidjar, Columbia University, author of The Jew, the Arab: A History of the Enemy (Stanford University Press, 2003) 'A bold and thought-provoking work' - Professor Richard Foltz, Concordia University, author of Iran in World History
Acknowledgements
Glossary
Preface
Introduction
1. The Land of Israel and Its Place in Jewish Tradition
2. The Jews of Europe: Between Equality and Extermination
3. A Return to the Promised Land as a Return to History
4. The Zionist Enterprise
5. The Nazi Genocide, Its Memory and Its Lessons
6. The Making and Maintaining of the Zionist State
7. Jewish Opposition to Zionism
8. Israeli Society and Jewish Communities
9. Israel in the International Arena
Conclusion: A State Without Borders
Notes
Index
Published by Pluto Press in May 2016
Paperback ISBN: 9780745335810
eBook ISBN: 9781783717835