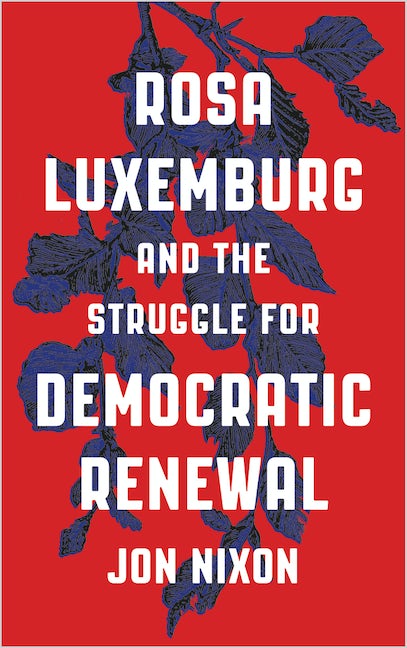 Rosa Luxemburg and the Struggle for Democratic Renewal

An examination of the enduring legacy of Rosa Luxemburg and her importance for activists and intellectuals alike.
What can contemporary activists and political theorists learn from the life and work of Rosa Luxemburg? Examining her contribution to radical democracy and revolutionary socialism, Jon Nixon shows why Red Rosa's legacy lives on.

Luxemburg's political and intellectual formation was in itself a 'long revolution', conceived of over time and in response to world events; her groundbreaking ideas around internationalism and spontaneity were formulated in the context of revolution. Returning to her thinking on global capitalism, democratic renewal, state militarism, and the social question, Nixon draws out the enduring nature of her work, using her framework of ideas as a lens through which to view the contemporary debates.

By establishing a rich and distinctive account of Luxemburg, Nixon makes the argument for why her struggle for democratic renewal is as relevant as ever.

Jon Nixon is Honorary Professor within the Education University of Hong Kong and Visiting Professor at Middlesex University, UK. He has written widely on cultural and intellectual history. His recent books include Hans-Georg Gadamer: The Hermeneutical Imagination (Springer, 2017), Hannah Arendt and the Politics of Friendship (Bloomsbury, 2015), Higher Education and the Public Good (Bloomsbury, 2012) and Rosa Luxemburg and the Struggle for Democratic Renewal (Pluto, 2018).

'An authoritative book that offers a compelling insight into the life and work of Rosa Luxemburg. Meticulously researched, this book showcases Nixon's breadth of scholarship, insight and critical imagination ... A significant contribution to the field of intellectual history' - Tanya Fitzgerald, La Trobe University 'Jon Nixon's absorbing encounter with Rosa Luxemburg's controversial legacy is at once a scholarly and thoroughly enjoyable reading of this remarkable thinker of 'the political'... and a timely reminder that Luxemburg's iconoclastic voice should play a decisive role in critical discussions of global politics today' - Patrick Hayden, Professor of Political Theory and International Relations, University of St Andrews 'Nixon is a superb biographical historian where he examines Luxemburg's life, and the story reaches through history to speak to us today. A book that is a must for all those who are committed to social justice and democracy, but recognise the challenges involve' - Professor Helen Gunter, The University of Manchester 'Jon Nixon provides us with a very well-written and detailed examination of Rosa Luxemburg and the historical and current importance of her work. This is a fine introduction to a compelling historical figure' - Michael W. Apple, John Bascom Professor of Education, University of Wisconsin, Madison, and author of Can Education Change Society?

Preface
Acknowledgements
A Note to the Reader
PART I - TAKING HISTORY AS IT COMES
1. The Long Apprenticeship
2. Entering History
PART II - THE WORLD UPSIDE DOWN
3. Political Struggle
4. Political Agency
5. Political Purpose
PART III - THINKING DIFFERENTLY
6. History is Now
7. The Long Revolution
Coda: ‘I Was I Am I Shall Be’
Glossary: Dates and Events, Organisations and People
Notes
References
Index