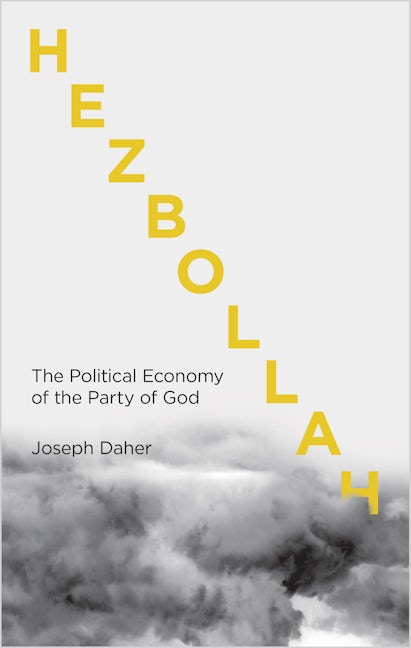 The Political Economy of Lebanon's Party of God

A study of the political nature and dynamics of Hezbollah in relation to the socio-economic and political context in Lebanon and in the wider region
Hezbollah provides a new, grounded analysis of the controversial and misunderstood Lebanese party. Where previous books have focused on aspects of the party’s identity, the military question or its religious discourse, here Joseph Daher presents an alternative perspective, built upon political economy.

Drawing on extensive fieldwork in Lebanon and dozens of interviews, as well as new archival and other primary sources, Daher’s analysis confidently positions Hezbollah within socio-economic and political developments in Lebanon and the Middle East. He emphasises Hezbollah’s historic ties with its main sponsor, the Islamic Republic of Iran, its media and cultural wings and its relationship with Western economic policies.

Further chapters examine the party’s policies towards workers’ struggles and women’s issues, and its orientation towards the sectarian Lebanese political system. Hezbollah is a well informed and fresh analysis of a topic which remains central to our understanding of one of the world’s most tumultuous and politically unstable regions.

'Most appraisals of Hezbollah from a left-wing perspective have focused, often solely, on its role in the fight against the Israeli occupation of Lebanon, thus serving the party's own mythology. The merit of this iconoclastic book is that it endeavours to analyse Hezbollah from a historical materialist perspective' - Gilbert Achcar, SOAS, University of London 'An insightful and timely analysis of Hezbollah, situating the party within a fascinating account of the wider Lebanese political economy. An important contribution' - Adam Hanieh, SOAS, University of London 'Timely...[a] well-rounded and incisive discussion of the organisation's place in the contemporary global order' - Muftah 'Both an excellent introduction and fine analysis of Hezbollah as a political entity in Lebanon as well as a social movement ... Highly recommended' - CHOICE '[An] excellent book ... [This] book is a must-read for those seeking to understand Middle Eastern politics. It provides much needed detail and historical context for understanding the rise of one of the most important political parties in the region' - Marxist Left Review 'Essential reading for anyone interested in gaining a more complete understanding of Hezbollah, or present day Lebanese politics' - Perspectives on Terrorism
List of Tables
Acknowledgements
Introduction
1. Sectarianism and the Lebanese Political Economy: Hezbollah’s Origins
2. Hezbollah and the Political Economy of Lebanese Neoliberalism
3. Lebanese Class Structure under Neoliberalism
4. Hezbollah and Shi’a Civil Society
5. Hezbollah and the Lebanese Labor Movement
6. Hezbollah’s Military Apparatus
7. Hezbollah and Revolutionary Processes in the Middle East and North Africa Since 2011
Conclusion
Appendix: Shi’a Fraction of the Bourgeoisie
Notes
References
Index
Published by Pluto Press in Oct 2016
Paperback ISBN: 9780745336893
eBook ISBN: 9781783719983