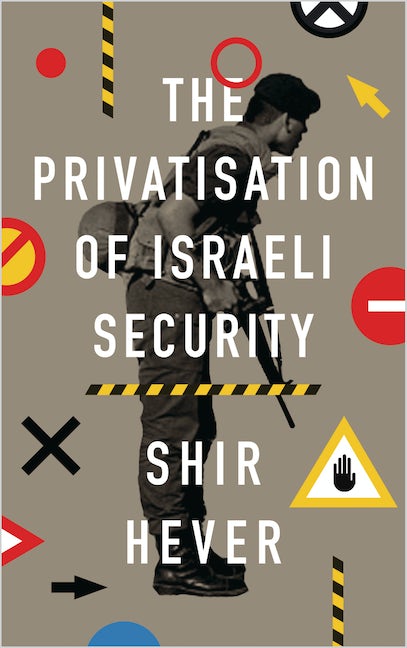 The Privatization of Israeli Security

Charts the rise of neoliberal Israel to show how Israeli security elites turn violence into a commodity.
Between 1994-2014, Israel’s security service was transformed, becoming one of the most extreme examples of privatised security in the world. This book is an investigation into this period and the conditions that created ‘Occupation Inc.’: the institution of a private military-security-industrial complex.

State sponsored violence is increasing as a result of this securitisation, but why is it necessary, and what are its implications? In this book, Shir Hever considers the impact of the ongoing Palestinian resistance to Israeli occupation, the influence of U.S. military aid and the rise of neoliberalism in Israel, to make sense of this dramatic change in security policy.

Through the lens of political economy, this book shows how the Israeli security elites turn violence into a commodity in order to preserve their status and wealth, providing a fresh new perspective on the Israeli occupation.

'Shir Hever has emerged as one of the most incisive analysts of the critical Israeli Left.' - Jonathan Nitzan, Professor in the Department of Political Science, York University 'Shir Hever is an "engaged intellectual" par excellence. As a political economist and activist, he is well-placed to explore a little-known but key facet of Israel's occupation: the privatization of Israeli security and the economic and political benefits that accrue from both Israel's Occupation and its constant state of militarism' - Jeff Halper, author of War Against the People: Israel, the Palestinians, and Global Pacification (Pluto, 2015) '[An] important study' - Socialist Review
List of Tables
List of Graphs
Acknowledgements
Abbreviations
Preface
1. Introduction
2. Theoretical Framework
3. Developments in Israel’s Military and Security Institutions
4. Processes of Privatization of Security in Israel
5. Outsourcing the Occupation
6. Global Dimensions of Security Privatization in Israel
7. Conclusions
Appendix: Overview of Privatization of Security in Israel
Notes
Filmography
Bibliography
Index
Published by Pluto Press in Nov 2017
Paperback ISBN: 9780745337197
eBook ISBN: 9781786801739

Between 1994-2014, Israel’s security service became one of the most extreme examples of privatised security in the world. In this blog, Shir Hever explores the encroachment of private security into shopping centres, coffee shops and public...

END_OF_DOCUMENT_TOKEN_TO_BE_REPLACED
Back to Top
X