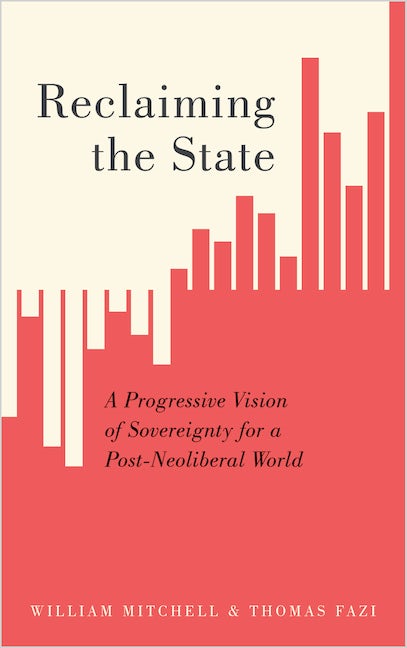 by William Mitchell and Thomas Fazi

A provocative economic analysis which reconceptualises the nation state as a vehicle for progressive change.
The crisis of the neoliberal order has resuscitated a political idea widely believed to be consigned to the dustbin of history. Brexit, the election of Donald Trump, and the neo-nationalist, anti-globalisation and anti-establishment backlash engulfing the West all involve a yearning for a relic of the past: national sovereignty.

In response to these challenging times, economist William Mitchell and political theorist Thomas Fazi reconceptualise the nation state as a vehicle for progressive change. They show how despite the ravages of neoliberalism, the state still contains resources for democratic control of a nation's economy and finances. The populist turn provides an opening to develop an ambitious but feasible left political strategy.

Reclaiming the State offers an urgent, provocative and prescient political analysis of our current predicament, and lays out a comprehensive strategy for revitalising progressive economics in the 21st century.

William Mitchell is Professor of Economics at the University of Newcastle, Australia. He is considered one of the world's leading heterodox economists and is the author of Reclaiming the State (Pluto, 2017).

'Prepare to be blown away and forget what you think you knew about money' - Independent 'This is an excellent book. Anyone who wants to understand why social democratic parties are in crisis across Europe should read it.' - Larry Elliott 'Important... An essential building-block for a constructive debate on a post-Brexit democratic politics' - Wolfgang Streeck, Max Planck Institute for the Study of Societies, Cologne 'Fascinating' - Heiner Flassbeck, Heiner Flassbeck, former German Vice-minister for Finance 'Essential reading for anyone who wants to understand the Corbyn phenomenon in the UK' - Eurointelligence 'Mitchell and Fazi convincingly show that the state continues to be at this critical point of history an unavoidable bottleneck... which ought to be reclaimed and subverted if we are to transform societies to the benefit of the peoples' - Sergi Cutillas, Economist and Researcher 'Will surely come to be seen as one of the more important social science works of our time' - Anthony Coughlan, Village 'Provides an excellent study of post-war economic history and a perceptive analysis of the options available for the future' - Counterfire
Acknowledgements
Introduction: Make the Left Great Again
Part I: The Great Transformation Redux: From Keynesianism to Neoliberalism – and Beyond
1. Broken Paradise: A Critical Assessment of the Keynesian ‘Full Employment’ Era
2. Destined to Fail: Understanding the Crisis of Keynesianism and the Rise of Neoliberalism
3. That Option No Longer Exists: How Britain, and the British Labour Party, Fell into the Monetarist Trap
4. The Paris Consensus: The French Left and the Creation of Neoliberal Europe
5. The State Never Went Away: Neoliberalism as a State-driven Project
6. Après Elle, le Déluge: Are We Entering a Post-Neoliberal Age?
Part II: A Progressive Strategy for the Twenty-First Century
7. Towards a Progressive Vision of Sovereignty
8. A Government is Not Like a Household: An Introduction to Modern Monetary Theory
9. I Have a Job for You: Why a Job Guarantee is Better than a Basic Income
10. We Have a (Central) Plan: The Case of Renationalisation
Conclusion: Back to the State
Notes
Index
Published by Pluto Press in Sep 2017
Paperback ISBN: 9780745337326
eBook ISBN: 9781786801494