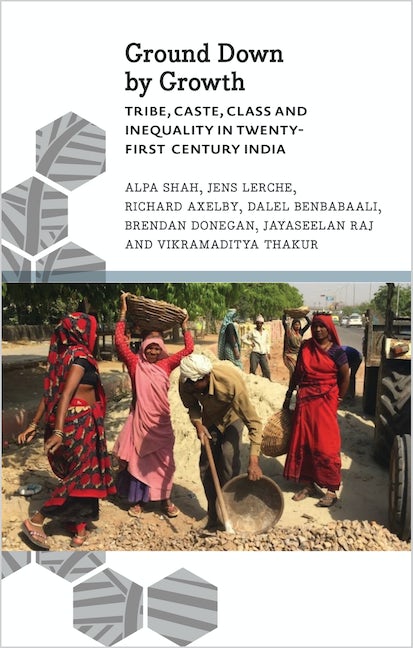 Ground Down by Growth

How do India’s ‘untouchables’ and 'tribals' fit into the global economy?

Why has India’s astonishing economic growth not reached the people at the bottom of its social and economic hierarchy? Travelling the length and breadth of the subcontinent, this book shows how India’s ‘untouchables' and ‘tribals' fit into the global economy.

India’s Dalit and Adivasi communities make up a staggering one in twenty-five people across the globe and yet they remain amongst the most oppressed. Conceived in dialogue with economists, the impact of global capitalism on their lives. It shows how capitalism entrenches, rather than erases, social difference and has transformed traditional forms of identity-based discrimination into new mechanisms of exploitation and oppression.

Through studies of the working poor, migrant labour and the conjugated oppression of caste, tribe, region, gender and class relations, the social inequalities generated by capitalism are exposed.

Alpa Shah is Associate Professor (Reader) in Anthropology at LSE. She is the author of Ground Down by Growth (Pluto, 2017) and In the Shadows of the State, Indigenous Politics, Environmentalism and Insurgency in Jharkhand, India (Duke, 2010). She has also written about affirmative action, labour migration, agrarian change and India and Nepal's Maoist inspired revolutionary struggles.

Jens Lerche is Reader in Labour and Agrarian Studies at SOAS, University of London. He has published on low castes, rural and migrant labour and agrarian relations in India for more than two decades. He is editor of the Journal of Agrarian Change and the author of Ground Down by Growth (Pluto, 2017).

Richard Axelby is a Lecturer in the Department of Development Studies at SOAS. His writing focuses on environmental history, natural resource management, science in colonial India, British identity and development work. He is the author of Ground Down by Growth (Pluto, 2017).

Dalel Benbabaali is a Leverhulme Early Career Fellow in Area Studies at the University of Oxford. She has previously taught at LSE and the Sorbonne University. She is the author of Ground Down by Growth (Pluto, 2017).

Brendan Donegan is a Visiting Fellow in Anthropology at LSE. He previously held positions at SOAS and Goldsmiths, where he taught courses in Social Anthropology and Development Studies. He is the author of Ground Down by Growth (Pluto, 2017).

Jayaseelan Raj is Assistant Professor at the Centre for Development Studies in Kerala. He completed his PhD in Anthropology at the University of Bergen before joining LSE as a postdoctoral fellow. He has conducted longterm fieldwork on Dalit and Adivasis in the tea plantations of South India and on their land struggles. He is the author of Ground Down by Growth (Pluto, 2017).

Vikramditya Thakur is Assistant Professor of Anthropology at the University of Delaware. Completing his PhD in Anthropology at Yale University, he worked as a postdoctoral fellow at London School of Economics and Brown University. His research on the Bhils of western India addresses forced displacement, resettlement, agrarian transformation and ecological changes.

'An exceptional book coming from researchers who lived with the most marginalised people to present the India of dislocation and despair' - Anand Teltumbde, writer, civil rights activist and Senior Professor of Business Management, IIIT Hyderabad

'Explodes the myth of the modernising power of capitalism. This sensitive and acute analysis shows that, far from doing away with inherited inequalities of power, Indian capitalism uses and intensifies them' - Jayati Ghosh, Centre for Economic Studies and Planning, Jawaharlal Nehru University, New Delhi

'Highly recommended for its careful attention to ethnographic detail, its systematically comparative approach and its grasp of political economy' - Journal of Contemporary Asia

Alpa Shah looks at how capitalism is entrenching social inequalities in India through inherited inequalities of power; seasonal casual labour migration; and the conjugated oppression of class, tribe, caste and gender.

END_OF_DOCUMENT_TOKEN_TO_BE_REPLACED

VIDEO: A Party with Socialists in It

Simon Hannah takes a whistle-stop tour through the history of the ‘party with socialists in it’ – from Keir Hardie to Jeremy Corbyn.

END_OF_DOCUMENT_TOKEN_TO_BE_REPLACED
Back to Top
X