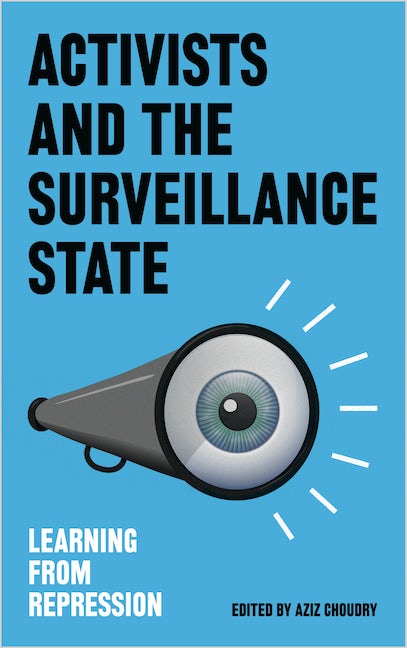 Activists and the Surveillance State

Analysis of the surveillance state from the perspective of those who have been subjected to its repression.
The use of secret police, security agencies and informers to spy on, disrupt and undermine opposition to the dominant political and economic order has a long history. This book reflects on the surveillance, harassment and infiltration that pervades the lives of activists, organisations and movements that are labelled as 'threats to national security'.

Activists and scholars from the UK, South Africa, Canada, the US, Australia and Aotearoa/New Zealand expose disturbing stories of political policing to question what lies beneath state surveillance.

Problematising the social amnesia that exists within progressive political networks and supposed liberal democracies, Activists and the Surveillance State shows that ultimately, movements can learn from their own repression, developing a critical and complex understanding of the nature of states, capital and democracy today that can inform the struggles of tomorrow.

Aziz Choudry was Associate Professor and Canada Research Chair in Social Movement Learning and Knowledge Production in the Department of Integrated Studies in Education, McGill University, and Visiting Professor at the Centre for Education Rights and Transformation (CERT), University of Johannesburg. He is editor of The University and Social Justice, Activists and the Surveillance State and Just Work? Migrant Workers' Struggles Today (Pluto, 2020, 2019, 2016).

'Activists and the Surveillance State is a wide-ranging exploration of collective organising in response to state and corporate surveillance. The book's rich discussion of what movements have learned, and failed to learn, about how surveillance works makes it a crucial reference for scholars and activists alike' - Arun Kundnani, author of 'The Muslims are Coming' 'This important collection draws critical attention to the harms of state surveillance and police power, and how this power has been challenged and resisted by ordinary citizens. It is a must read for activists, community organisers and scholars alike' - Waqas Tufail, Leeds Beckett University 'Activists in social movements and others challenging the prevailing socio-economic and political structures will find in this book invaluable lessons and an effective antidote to the harassment, infiltration and 'dirty tricks' of agencies that uphold the interests of the corporate and political elite' - Salim Vally, University of Johannesburg 'By asking us to consider different histories of knowledge production and resistance, this book provides a nuanced and timely intervention in our ongoing reflections on confrontations with state security, and how they can be used for advancing radical political alternatives' - Dr Lina Dencik, Cardiff University 'An important intervention that moves us beyond assessments of the scale and scope of surveillance and securitisation to reflect on lessons learned from multiple global resistance movements. The contributions in this book prompt us to consider possibilities for more hopeful futures' - Nisha Kapoor, author of 'Deport, Deprive, Extradite: 21st Century State Extremism'
Acknowledgements
Part I
1. Lessons Learnt, Lessons Lost: Pedagogies of Repression, Thoughtcrime, and the Sharp Edge of State Power - Aziz Choudry
2. The Surveillance State: A Composition in Four Movements - Radha D’Souza
3. Activist Learning and State Dataveillance: Lessons from the UK, Mauritius and South Africa - Jane Duncan
Part II
4. Coming of Age Under Surveillance: South Asian, Arab and Afghan American Youth and Post-9/11 Activism - Sunaina Maira
5. ASIO and the Australia–Timor-Leste Solidarity Movement, 1974–79 - Bob Boughton
6. The Plantation-to-Plant-to-Prison Pipeline: David Austin Interviewed by Aziz Choudry
7. Forgetting National Security in ‘Canada’: Towards Pedagogies of Resistance - Gary Kinsman
8. Prevent as Far-Right Trojan Horse: The Creeping Radicalisation of the UK National Security Complex - Nafeez Ahmed
9. Political Policing in the UK: A Personal Perspective - Emily Apple
10. Spies Wide Shut: Responses and Resistance to the National Security State in Aotearoa New Zealand - Valerie Morse
Part III
11. Undercover Research: Academics, Activists and Others Investigate Political Policing - Eveline Lubbers
Notes on Contributors
Index

Police, security agencies and spies disrupting opposition to the dominant political order has a long history. Aziz Choudry analyses spycops as a someone who has been subjected to its repression.

END_OF_DOCUMENT_TOKEN_TO_BE_REPLACED
Back to Top
X