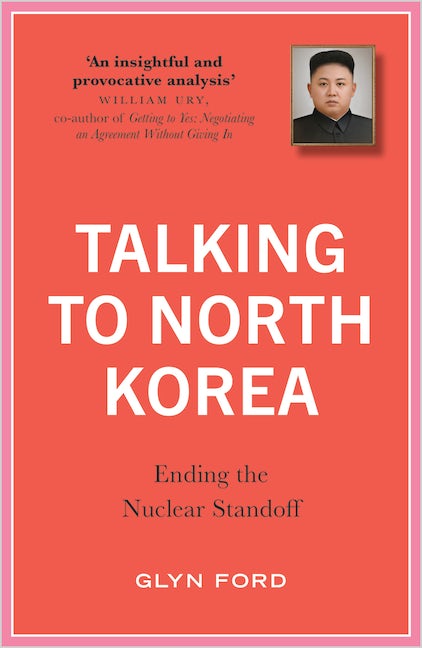 There are many roads to war, but only one path to peace in North Korea
Despite recent attempts at 'negotiation', the attitudes of both Kim Jong-un's regime and the West seem unchanged. North Korea is still shrouded in mystery, and there are no clear plans for the future... Can we trust either side to bring about peace? And if so, how?

This provocative insider's account blasts apart the myths which paint North Korea as a rogue state run by a mad leader. Informed by extraordinary access to the country's leadership, Glyn Ford investigates the regime from the inside, providing game-changing insights, which Trump and his administration have failed to do. Acknowledging that North Korea is a deeply flawed and repressive state, he nonetheless shows that sections of the leadership are desperate to modernise and end their isolation.

With chapters on recent developments including the Trump / Kim summit, Ford supports a dialogue between East and West, whilst also criticising Trump's facile attempts. Talking to North Korea provides a road map for averting a war in North East Asia that would threaten the lives of millions.

Glyn Ford is Director of Track2Asia, a representative on Labour's National Policy Forum and a member of the Labour Party's International Committee. He is the author of Talking to North Korea (Pluto, 2018) and North Korea on the Brink (Pluto, 2007). He has visited North Korea almost 50 times as an MEP amongst other professional capacities.

'An insightful and provocative analysis' - William Ury, co-founder of the Harvard Negotiation Project, co-author of Getting to Yes: Negotiating an Agreement Without Giving In (Random House, 2012) 'A timely, perceptive, and penetrating analysis of North Korea. This is a must for those who are interested in contemporary North Korean affairs' - Chung-in Moon, Distinguished University Professor, Yonsei University 'With almost fifty visits to the DPRK, Glyn Ford is one of the top European experts on the Korean Peninsula. Readers, whatever their political views, will find much to stimulate their thinking regarding one of the most important political-security issues of our time' - Jeffrey D. Feltman, United Nations Under-Secretary-General for Political Affairs 'With direct access to North Korean government officials and a lifetime of observation and analysis of the country, Glyn Ford has an insight into the country like no other. A strongly recommended impartial read, revealing previous political tricks and failures of 73 years of miscommunication and stagnation... and a possible path out of this mess' - Nicholas Bonner, Founder of Koryo Tours 'Glyn Ford is a very rare case of a Westerner who has both political experience in the West and first-hand experience of dealing with North Korea. His book shows a possible way out of the continuous crisis through slow-motion change - the only way which might work' - Andrei Lankov, author of 'The Real North Korea: Life and Politics in the Failed Stalinist Utopia '
List of Figures and Tables
Map of North Korea
Country Leaders, 1990-2018
Chronology Since 1900
Acknowledgements
Note on Asian Names
Preface
1. Introduction: The Pyongyang Paradox
Part I: Roots of the Present Crisis: Understanding North Korea’s History
2. Drawing the Iron Curtain
3. Kim’s Korea
4. Famine, Markets, Refugees and Human Rights: The Kim Jong II Era
Part II: Continuity and Change
5. Kim Jong Un
6. Daily Life in North Korea
Part III: The Diplomatic Stage
7. The Nuclear Factor
8. Foreign Affairs: Between Rapprochement and Standoff
9. Conclusion: After Singapore
Notes
Bibliography and Further Reading
Index
Published by Pluto Press in Sep 2018
Paperback ISBN: 9780745337852
Hardcover ISBN: 9780745337869
eBook ISBN: 9781786803047

VIDEO: Glyn Ford, Talking to North Korea – After the Summit

In this short video, North Korea expert Glyn Ford talks about the recent Trump-Kim Jong Un summit in Singapore, and identifies the potential pitfalls in the journey to reach a meaningful agreement over the coming months.

END_OF_DOCUMENT_TOKEN_TO_BE_REPLACED

In this short video, North Korea expert and author of ‘Talking to North Korea’ Glyn Ford debunks five big myths about North Korea, including the rationale behind its nuclear weapons programme.

END_OF_DOCUMENT_TOKEN_TO_BE_REPLACED
Back to Top
X