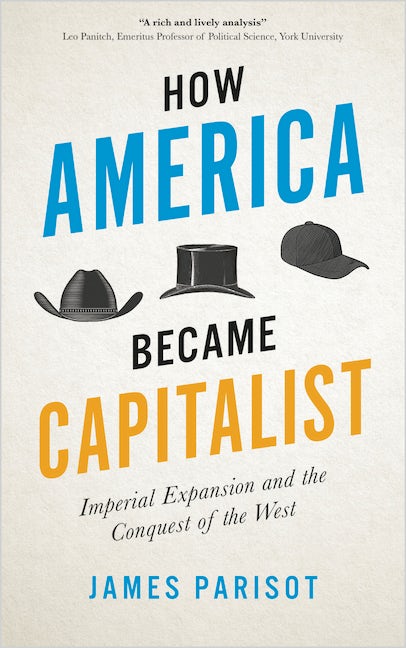 Imperial Expansion and the Conquest of the West

An epic history of the formation of American capitalism, focusing on gender, race and Empire.
Has America always been capitalist? Today, the US sees itself as the heartland of the international capitalist system, its society and politics intertwined deeply with its economic system. This book looks at the history of North America from the founding of the colonies to debunk the myth that America is 'naturally' capitalist.

From the first white-settler colonies, capitalist economic elements were apparent, but far from dominant, and did not drive the early colonial advance into the West. Society, too, was far from homogeneous - as the role of the state fluctuated. Racial identities took time to imprint, and slavery, whilst at the heart of American imperialism, took both capitalist and less-capitalist forms. Additionally, gender categories and relations were highly complex, as standards of 'manhood' and 'womanhood' shifted over time to accommodate capitalism, and as there were always some people challenging this binary.

By looking at this fascinating and complex picture, James Parisot weaves a groundbreaking historical materialist perspective on the history of American expansion.

James Parisot is an affiliate faculty member in Sociology at Drexel University. He has published articles in a variety of scholarly journals, is co-editor of the book American Hegemony and the Rise of Emerging Powers: Cooperation or Conflict? (Routledge, 2017), and is the author of How America Became Capitalist: Imperial Expansion and the Conquest of the West (Pluto, 2019).

'Parisot's rich and lively analysis of the domestic history of US empire helps readers understand what it was about the development of US economic, social and political institutions that made the American state so central in the making of global capitalism' - Leo Panitch, Emeritus Professor of Political Science, York University 'There is a relatively limited literature covering the entire course of the USA's transition to a capitalist society. In his concise but illuminating new book, James Parisot provides such an account.' - Neil Davidson, author of 'How Revolutionary were the Bourgeois Revolutions?' 'Utilizing the notion of 'empire' and focusing on the geographic expansion of commodity production and circulation across the North American continent, James Parisot's provocative book will be a focus of debate in years to come' - Charles Post, City University of New York, author of 'The American Road to Capitalism' 'Terrific ... At the heart of American capitalism is a history of empire. Starting from this powerful insight, James Parisot carefully investigates this history in its race, class, and gender dimensions.' - David McNally, Cullen Distinguished Professor of History and Business, University of Houston

Acknowledgements
Introduction: The Embrace of Empire
1. The Origins of Colonial Society
2. The Expansion of Empire
3. Kentucky and Ohio
4. Slavery and Capitalism
5. The Progress of Empire
6. The Consolidation of American Capitalism
Conclusion: Capital and the Conquest of Space
Notes
Index