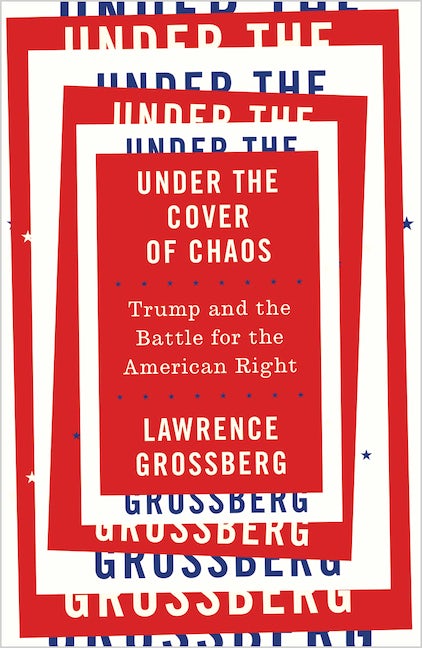 Under the Cover of Chaos

Trump and the Battle for the American Right

A cultural analysis of anxiety, alienation and narcissism in America.

Are Donald Trump's irrationality, cruelty, and bombast symptoms of his personality? Is the chaos surrounding him a sign of his incompetence? Are his populism, illiberalism and nationalism just cynical appeals to existing feelings of abandonment, resentment and rage?

Lawrence Grossberg shows that the truth is bigger and more frightening. Locating Trumpism in the long struggle among traditional conservatism, the new right and the reactionary right, he suggests that the chaos is far more significant and strategic ... and dangerous. Taking the arguments of the reactionary right seriously, he projects a possible, nightmarish future: a cultural nationalism governed by a popular corporatocracy.

He lays bare how contemporary political struggles are being shaped by a changing national landscape of moods and feelings, marked by a growing absolutism of judgement and belief, and new forms of anxiety, alienation and narcissism.

Lawrence Grossberg has been writing about popular culture, youth culture and political culture in post-WW2 United States, for over four decades. He is the Morris Davis Distinguished Professor in Communication and Cultural Studies at the University of North Carolina. He is internationally recognised as a leading figure in Cultural Studies, and his work has been translated into eighteen languages. He is the author of Under the Cover of Chaos (Pluto, 2017), We All Want to Change the World (2015), Cultural Studies in the Future Tense (Duke, 2010) and Caught in the Crossfire (Routledge, 2005) amongst many other works.

'A profound and insightful analysis of the diverse forces that have led to Trump's election. Everyone should read this book if they want to understand the rise of authoritarianism in the United States'

- Henry Giroux, McMaster University Professor for Scholarship in the Public Interest, author of On Critical Pedagogy

'This is a timely book, to say the least. Beyond the moment, however, Grossberg's vision is thought-provoking, stirring, even exciting as well as frightening because it shows that there are new things to say about the morass of American and other democratic politics today and new ways to understand our situation. It's also a rattling good read'

Preface
Part I: From Trump to the Conjuncture
1. The Terror and the Beast
2. Telling Stories and Stories Told
3. Other Stories are Possible, and Possibly Even Better
Part II: In Search of the Conjuncture
4. The New Right
5. The Reactionary Right
6. Affective Landscapes
Part III: A Conjunctural Politics
7. Back to the Present: A Reactionary Counter-Modernity
8. Conclusions?
Appendix: Cultural Studies and Conjunctural Analysis
Bibliography
Thanks

Lawrence Grossberg diagnoses our contemporary malaise; poking holes in the Trump-led right’s veneer and exposing the limits of a left-led identity politics.

END_OF_DOCUMENT_TOKEN_TO_BE_REPLACED
Back to Top
X