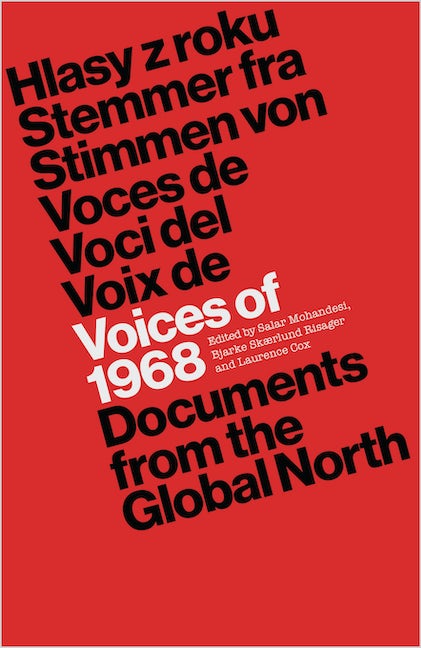 Documents from the Global North

A vivid collection of texts from the movements and uprisings of the 'long 1968'.
The year 1968 witnessed one of the great upheavals of the twentieth century, as social movements shook every continent. Across the Global North, people rebelled against post-war conformity and patriarchy, authoritarian education and factory work, imperialism and the Cold War. They took over workplaces and universities, created their own media, art and humour, and imagined another world. The legacy of 1968 lives on in many of today's struggles, yet it is often misunderstood and caricatured.

Voices of 1968 is a vivid collection of original texts from the movements of the long 1968. We hear these struggles in their own words, showing their creativity and diversity. We see feminism, black power, anti-war activism, armed struggle, indigenous movements, ecology, dissidence, counter-culture, trade unionism, radical education, lesbian and gay struggles, and more take the stage.

Salar Mohandesi is an Assistant Professor of History at Bowdoin College and a founding editor of Viewpoint Magazine. His current project, From Anti-Imperialism to Human Rights, traces the history of transnational anti-Vietnam War activism.

Bjarke Skærlund Risager is a Postdoctoral Fellow in the Department of Geography & Planning, University of Toronto where he works on a project on resistance to gentrification and precarity under post-industrialisation. He recently co-edited Contested Property Claims: What Disagreement Tells us about Ownership (Routledge, 2018). He is the co-editor of Revolution in the Air?: 1968 in the Global North (Pluto, 2018).

'This extraordinary collection brings together the great manifestos, political programmes, and other original writings that inspired - and were inspired by - the movements and uprisings of 1968... indispensable for anyone interested in the global upheavals of that annus mirabilis' - Jeff Goodwin, NYU, editor of The Social Movements Reader and author of No Other Way Out: States and Revolutionary Movements, 1945-1991 'Read Voices of 1968 to understand how, why and where deeply rooted activist currents coalesced into a global uprising that changed the world. Here are the transnational threads of hope and possibility desperately needed in an era of neoliberalism' - Robyn C. Spencer, CUNY, author of The Revolution Has Come: Black Power, Gender, and the Black Panther Party 'The many revolts and uprisings of 1968 have frequently been told through narratives which have depoliticised them. This valuable collection of original documents and writings reasserts the diverse forms of radicalism and struggles for radical change in this pivotal year. It's a significant resource for hope and struggle' - David Featherstone, School of Geographical and Earth Sciences, University of Glasgow, and author of Solidarity: Hidden Histories and Geographies of Internationalism 'Here are voices from the marvellous year of 1968, as they spoke then. Some speak to projects we still struggle to realise half a century later. If a few are slightly mad, most are empowering, we know them as our own. We are their inheritor' - Colin Barker, Senior Lecturer Emeritus, Manchester Metropolitan University, editor of Revolutionary Rehearsals and author of Festival of the Oppressed 'This is a direly needed document collection of great value. To the best of my knowledge, this is the most comprehensive such publication on global 1968 in any Western language' - Gerd-Rainer Horn, author of The Spirit of '68: Rebellion in Western Europe and North America, 1956-76 'These revolutionary texts, many translated into English for the first time, contribute to challenge the whitewashing of this extraordinary year of anti-imperialist, anti-capitalist, antiracist, feminist and LGBT struggles' - Françoise Vergès, Chair Global South(s), Maison des sciences de l'homme, Paris 'An invaluable collection of original material from this most epic of years ranging right across Europe and the USA for its sources' - Philosophy Football

1968 was the highpoint of a cycle of popular struggles that shook edifices of power across the world. In this blog, Laurence Cox records the struggles that challenged racism and patriarchy, colonialism, heteronormativity and authoritarianism.

Lessons of the 1968 Revolt in France

Extracted from Voices of 1968, this text by the Italian Potere Operaio looks back to the May 1968 revolutions, calling for workers to organise from the grassroots.

END_OF_DOCUMENT_TOKEN_TO_BE_REPLACED
Back to Top
X