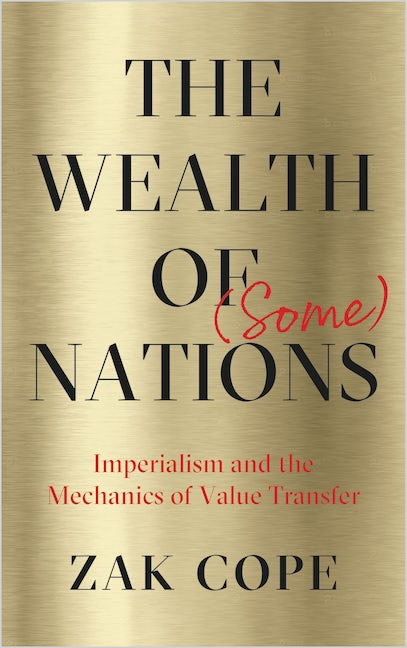 The Wealth of (Some) Nations

Imperialism and the Mechanics of Value Transfer

A taboo-busting critique of the transfer of wealth from the global South to the global North.
In this provocative new study, Zak Cope makes the case that capitalism is empirically inseparable from imperialism, historically and today. Using a rigourous political economic framework, he lays bare the vast ongoing transfer of wealth from the poorest to the richest countries through the mechanisms of monopoly rent, unequal exchange and colonial tribute. The result is a polarised international class structure with a relatively rich Global North and an impoverished, exploited Global South.

Cope makes the controversial claim that it is because of these conditions that workers in rich countries benefit from higher incomes and welfare systems with public health, education, pensions and social security. As a result, the internationalism of populations in the Global North is weakened and transnational solidarity is compromised.

The only way forward, Cope argues, is through a renewed anti-imperialist politics rooted in a firm commitment to a radical labour internationalism.

Zak Cope is the author of The Wealth of (Some) Nations (Pluto, 2019) Divided World Divided Class: Global Political Economy and the Stratification of Labour Under Capitalism (Kersplebedeb, 2015), He is co-editor of the Journal of Labor and Society and the Encyclopedia of Imperialism and Anti-Imperialism.

'The most significant book published on the political economy of imperialism in the 21st century, written by the foremost scholar of global imperialism today.' - Immanuel Ness, author of 'Southern Insurgency: The Coming of the Global Working Class' 'Global inequality isn't natural; it's created. Zak Cope explains how the rules of the international economy have been designed to benefit a few powerful nations in the Global North at the expense of most of the rest of the world. A brilliant intervention from one of the best scholars in the field.' - Jason Hickel, Goldsmiths, University of London 'Highly important and timely. Required reading for anyone interested in understanding the nature of current global capitalism, rather than remaining hoodwinked by the mythology of equality and liberty' - Amiya Bagchi, Monash University 'Powerfully challenges the imperialism-denial dominating Marxist theory and practice in Europe and North America and influential elsewhere. Whether or not you agree with all its arguments and conclusions, you'll find this to be a stimulating and thought-provoking book' - John Smith, author of 'Imperialism in the Twenty-First Century'