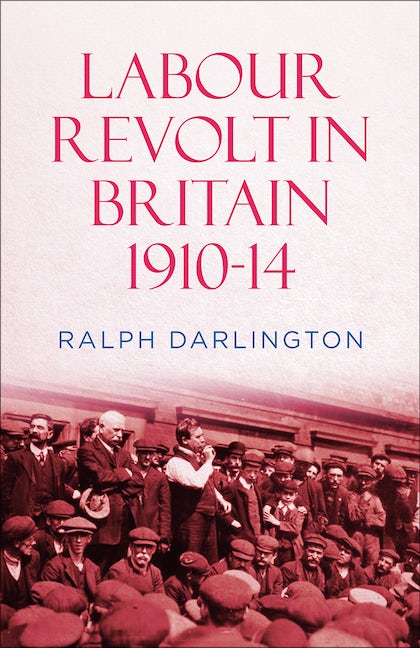 The Labour Revolt that swept Britain in the early 20th century was one of the most sustained, dramatic and violent explosions of industrial militancy and social conflict the country has ever experienced.

It involved large-scale strikes by miners, seamen, dockers, railway workers and many others, and was dominated by unskilled and semi-skilled workers, many acting independently of trade-union officials. Amidst this powerful grassroots energy, the country saw widespread solidarity action, phenomenal union membership growth, breakthroughs in both industrial unionism and women's union organisation, and a dramatic increase in the collective power of the working-class movement. It heralded political radicalisation that celebrated direct action and challenged head-on the Liberal government and police and military, as well as parliamentary reformism of the Labour Party.

Exploring the role of the radical left and the relationship between industrial struggles and political organisation, with new archival research and fresh insights and combining history from below and above, Ralph Darlington provides a multi-dimensional portrayal of the context, causes, actors, dynamics and contemporary significance of the Labour Revolt.

Ralph Darlington is Emeritus Professor of Employment Relations at Salford University. He has published a number of books, including Glorious Summer: Class Struggle in Britain 1972 and Radical Unionism: The Rise and Fall of Revolutionary Syndicalism. His research has been featured in national newspapers, and radio and television.

‘A fascinating book that reminds us, with passion and vigor, of the years of political and trade union organization of the English workers' movement on the eve of the Great War. Unmissable.’

- Raquel Varela, labour historian, professor at FCSH-Universidade Nova de Lisboa and author of ‘A People's History of Europe: From World War 1 to Today’

‘Based on meticulous historical research, this important study refutes once again the myth of working-class ‘quiescence’. Addressing the remarkable eruption and trajectory of the great Labour Revolt in the years before World War I, Ralph Darlington reconstructs the many forms of autonomous worker resistance and its entanglement with trade union officialdom, as well as close links to radical socialist politics. His book provides a highly significant new contribution to the analysis of the limits and potential of industrial militancy and its relationship to political action and organisation.’

‘In the first book-length study of the 1910–14 labour revolt, Ralph Darlington convincingly conveys the breadth, depth, and limitations of its many strike movements. Within ten years, British politics, trade unionism, and industrial relations would be transformed.’

‘A timely warning from history. Rising poverty and strike action. Collective bargaining, a tool for managing workers discontent. Westminster failing workers. An active rank & file holding unions accountable. All vital lessons we must apply during this current period of unrest.’

‘Drawing on modern historical research, Darlington depicts a broad working-class revolt in which radical activists played an important catalysing role. In discussing both the successes and the failures of the movement, he demonstrates its continued contemporary relevance.’

1. Contexts and Causes
2. Influence of the Left