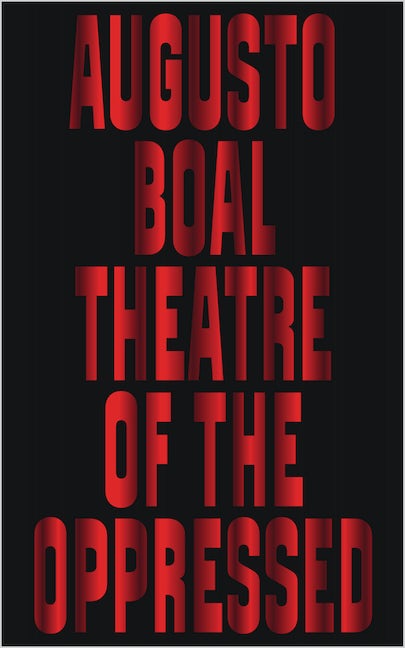 Theatre of the Oppressed

The book that started a revolution in modern theatre.
Augusto Boal saw theatre as a mirror to the world, one that we can reach into to change our reality. This book, The Theatre of the Oppressed, is the foundation to 'Forum Theatre', a popular radical form practised across the world.

Boal's techniques allowed the people to reclaim theatre, providing forums through which they could imagine and enact social and political change. Rejecting the Aristotelian ethic, which he believed allowed the State to remain unchallenged, he broke down the wall between actors and audience, the two sides coming together, the audience becoming the 'spect-actors'.

Written in 1973, while in exile from the Brazilian government after the military coup-d'etat, this is a work of subversion and liberation, which shows that only the oppressed are able to free themselves.

Augusto Boal (1931-2009) was a Brazilian theatre practitioner, drama theorist and political activist. He is the author of Theatre of the Oppressed (Pluto Press, 2019).

'Boal's terrific energy came from his The book that started a revolution in modern theatre.faith in the creativity, spontaneity and ability of all people, however underprivileged, to change their situation' - The Guardian 'Should be read by everyone in the world of theatre who has any pretensions at all to political commitment' - John Arden, playwright '[His] achievement is so remarkable, so original and so ground-breaking that I have no hesitation in describing the book as the most important theoretical work on the theatre in modern times' - George Wellwarth, author of Modern Drama and the Death of God 'Oppression, according to Augusto Boal, is when one person is dominated by the monologue of another and has no chance to reply. Boal's life is devoted to giving those who are in this one-down position the tools with which to express themselves and discover a way out of their powerlessness' - The Harvard Gazette 'An affable intellectual and an effervescent teacher, [Boal] was a theatrical Johnny Appleseed who spent his later years spreading his doctrines of the theater as a land of equal opportunity for professionals and nonprofessionals alike' - The New York Times

Preface to the 2008 edition
Preface to the 2000 edition – The Unruly Protagonist
Preface to the 1974 edition
1. Aristotle’s Coercive System of Tragedy
Introduction
Art Imitates Nature
What is the Meaning of ‘Imitation’?
What, then, is the Purpose of Art and Science?
Major Arts and Minor Arts
What does Tragedy Imitate?
What is Happiness?
And What is Virtue?
Necessary Characteristics of Virtue
The Degrees of Virtue
What is Justice?
In What Sense can Theatre Function as an Instrument for Purifi cation and Intimidation?
The Ultimate Aim of Tragedy
A Short Glossary of Simple Words
How Aristotle’s Coercive System of Tragedy Functions
Different Types of Confl ict: Hamartia and Social Ethos
Conclusion
2. Machiavelli and the Poetics of Virtù
The Feudal Abstraction
The Bourgeois Concretion
Machiavelli and Mandragola
Modern Reductions of Virtù
3. Hegel and Brecht: The Character as Subject or the Character as Object?
The ‘Epic’ Concept
Types of Poetry in Hegel
Characteristics of Dramatic Poetry, Still According to Hegel
Freedom of the Character-Subject
A Word Poorly Chosen
Does Thought Determine Being (or Vice Versa)?
Can Man be Changed?
Confl ict of Wills or Contradiction of Needs?
Empathy or What? Emotion or Reason?
Catharsis and Repose, or Knowledge and Action?
How to Interpret the New Works?
The Rest Does Not Count: They Are Minor Formal Differences Between the Three Genres
Empathy or Osmosis
4. Poetics of the Oppressed
Experiments with the People’s Theatre in Peru
Conclusion: ‘Spectator’, a Bad Word!
5. Development of the Arena Theatre of São Paulo
Need for the ‘Joker’
Goals of the ‘Joker’
Structures of the ‘Joker’
Appendices
Notes
Index