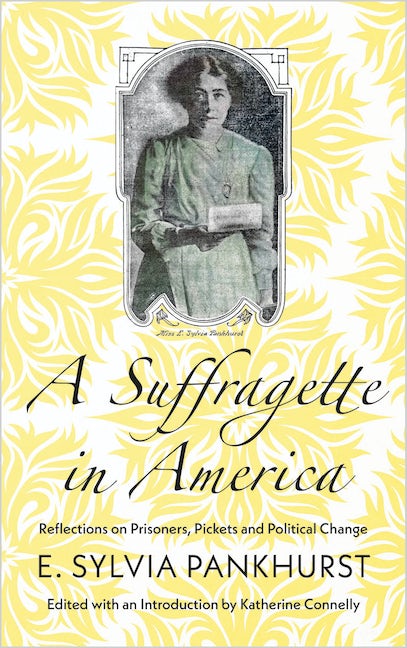 The story of one of Britain's most famous radicals visiting the 'Land of the Free'
This book is a collection of Sylvia Pankhurst's writing on her visits to North America in 1911-12. Unlike the standard suffragette tours which focused on courting progressive members of America's social elite for money, Pankhurst got her hands dirty, meeting striking laundry workers in New York, visiting female prisoners in Philadelphia and Chicago and grappling with horrific racism in Nashville, Tennessee.

Adored by socialist students and progressive politicians, Pankhurst was also shocked by the dark underbelly of American society. Bringing her own experiences of imprisonment and misogyny from her political work in Britain, she found many parallels between the two countries. These never-before-published writings mark an important stage in the development of the suffragette's thought, which she brought back to Britain to inform the burgeoning working-class suffrage campaign there.

The book also includes a contextualising introduction by Katherine Connelly.

'Sylvia Pankhurst's writing on America is vibrant and engaging, combining an impassioned critique of different and reinforcing forms of oppression. This volume affords new insights by placing the text in the turbulent political context in which it was written. An important contribution to history' - Helen Pankhurst, writer, activist and Sylvia Pankhurst's granddaughter 'The relationship between Sylvia Pankhurst and America is decisive and crucial to understanding Pankhurst's politics, life and historical legacy. This is a timely and lively new contribution to Sylvia Pankhurst studies' - Rachel Holmes, author of Eleanor Marx: A Life (2014) and Sylvia Pankhurst: Natural Born Rebel (2019) 'Sylvia Pankhurst's acute observations on American society are now accessible in this engaging book. Connelly's thoughtful introduction clarifies the significance of Sylvia's words at a crucial moment for the wider women's and labour movement' - Karen Hunt, author of 'Equivocal Feminists: The Social Democratic Federation and the Woman Question' 'With this book Connelly cements her status as one of our foremost experts on Pankhurst, and gives us a vital addition not just to the suffragette, but socialist canon' - Dr Louise Raw, author of Striking a Light: The Bryant and May Matchwomen and their Place in History (Continuum, 2011)

END_OF_DOCUMENT_TOKEN_TO_BE_REPLACED

Katherine Connelly talks about Sylvia Pankhurst’s 1911-12 US tours, and the profound impact they had on her and the wider British suffrage movement.

END_OF_DOCUMENT_TOKEN_TO_BE_REPLACED
Back to Top
X