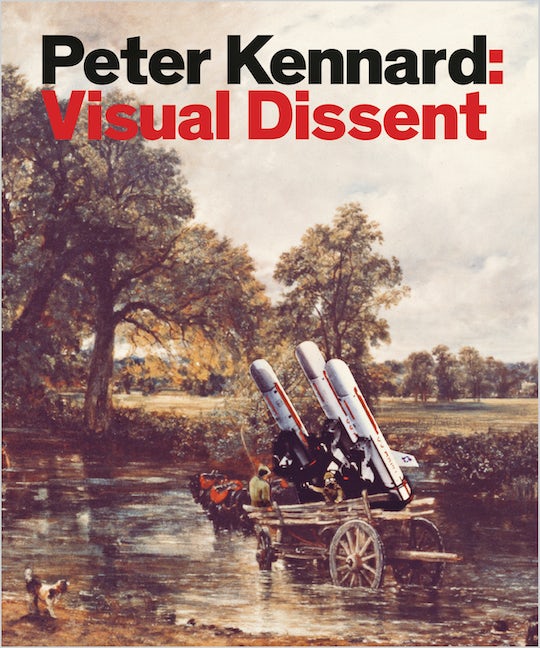 The book centres around Kennard's images, photomontages and illustrations from protests, year by year, which provoked public outrage; including Israel/Palestine protests, anti-nuclear protests, responses to austerity, climate destruction, and more. Each image is accompanied by captions detailing not only the events in question, but Kennard's approach to the work, including the genesis of the images and the techniques employed.

Peter Kennard is Professor of Political Art at the Royal College of Art. He is the author of Images for End of Century: Photomontages Equations (Pluto, 1999). In 2015, the Imperial War Museum hosted a year long retrospective of his work Peter Kennard: Unofficial War Artist. He has published numerous art monographs, and contributed his visuals to publications, magazines and news stories in the press.

'These images refuse to be forgotten ... they remind us of the need to speak out in protest, the protests of the dead and the living'

'This art is a a jolt of electricity. A shot in the arm. A kick up the backside. You know what? It’s a wake-up call'

'I take my hat off to you Sir'

'Art cannot change the world but while Kennard is still working, there is at least hope'

'Kennard sees the skull beneath the skin all right: an area dominated by greed, indifference, ruthlessness, naked force against the powerless; the holy grail of the Big Buck'

'In its form and power, Peter Kennard's art ranks among the most important in the late 20th and early 21st centuries. His pictures brilliantly evoke the faces that cry out from the silent war'

'Peter Kennard's work is a harrowing x-ray of the shadow side of the world. He perfectly captures the brutal asymmetries of our age: heavy weaponry trained on broken people, all-seeing technologies and disappearing identities, perpetually exhaling industry and an asphyxiating planet'

'Peter Kennard's work is redolent of the best anti-war imagery of Goya, it is iconic in our movement and beyond'

Series Preface
Preface
1. Feminist Futures: A Conditional Paeon for the Anything-Digital
2. Scale, Subject and Stories: Unreal Objects
3. Bland Ambition? Automation's Missing Visions
4. Driving at the Anthropocene, or, Let's Get Out of Here: How?
5. Technological Feminism and Digital Futures
Bibliography

This month we discuss the arms trade, ‘artwash’ and the power of political art, with artist Peter Kennard and Rhianna Louise, an organiser at Art the Arms Fair.

END_OF_DOCUMENT_TOKEN_TO_BE_REPLACED
Back to Top
X