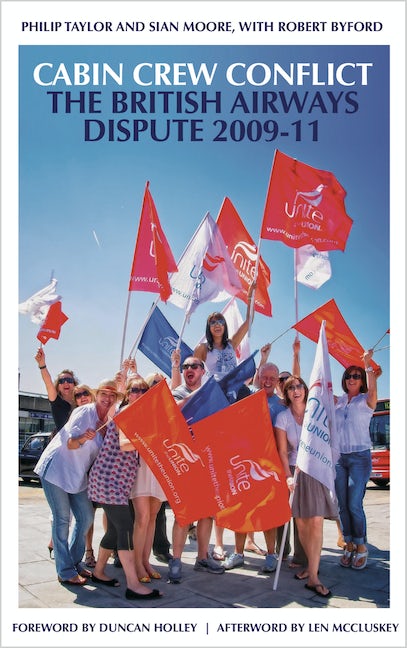 A compelling oral history of the 2009-11 strike action carried out by cabin crew workers against British Airways.
In 2009, cabin crew in the BASSA union embarked on a historic, two-year battle against British Airways which was seeking to impose reduced crew levels and to transform working conditions. In the face of employer hostility, legal obstruction, government opposition and adverse media coverage, this workforce, diverse in terms of gender, sexuality, race and nationality undertook determined resistance against this offensive. Notably, their action included twenty-two days of strike action that saw mass participation in rallies and on picket lines. The dispute cost British Airways 150 million in lost revenue and its main outcome was the cabin crew's successful defence of their union and core conditions.

Here, in their own words, Cabin Crew Conflict tells the strikers' story, focusing on cabin crew responses, perceptions of events, and their lived experiences of taking industrial action in a hostile climate. Foregrounding questions of class, gender and identity, and how these were manifest in the course of the dispute, the authors highlight the strike's significance for contemporary employment relations in and beyond the aviation industry.

Lively and insightful, Cabin Crew Conflict explores the organisational and ideological role of the trade union, and shows how a 'non-traditional' workforce can organise and take effective action.

Sian Moore is Professor of Employment Relations and Human Resource Management and Co-Director of the Centre for Research on Employment and Work (CREW) at the University of Greenwich.

Robert Byford is a Lecturer and former cabin crew member who photographed the union meetings leading up to the strike.

Len McCluskey is General Secretary of Unite the Union.

'Deserves to be read by everyone interested in building a better world for workers' - Paul Mason, author of 'PostCapitalism: A Guide to Our Future' 'Unique ... it lays bare cabin crew emotions ranging from the sense of injustice, anger, fears and anxieties to the joy and sense of liberation that can come from collective organisation' - Maxine Peake, Actress and Writer 'This excellent book is a timely reminder that strikes and conflict remain enduring features of UK industrial relations. The authors make a significant theoretical and empirical contribution to our understanding of the meanings of strike action from the perspective of strikers themselves, and to our knowledge of strikes generally' - Richard Hyman, author of 'Understanding European Trade Unionism: Between Market, Class and Society'
List of Photographs
Acknowledgements
Foreword by Len McCluskey
Preface by Duncan Holley
Timeline
1. Introduction
2. Cabin Crew Collectivism
3. Project Columbus
4. Balloting, the Right to Strike and British Airways Counter-Mobilisation
5. Collective Organisation: The XXXX Campaign
6. Outcomes: Worlds Turned Upside Down
7. Conclusion
Afterword by John Hendy QC
Appendix: The Participants
Notes
Bibliography
Index
Published by Pluto Press in Jul 2019
Hardcover ISBN: 9780745339917
eBook ISBN: 9781786804907