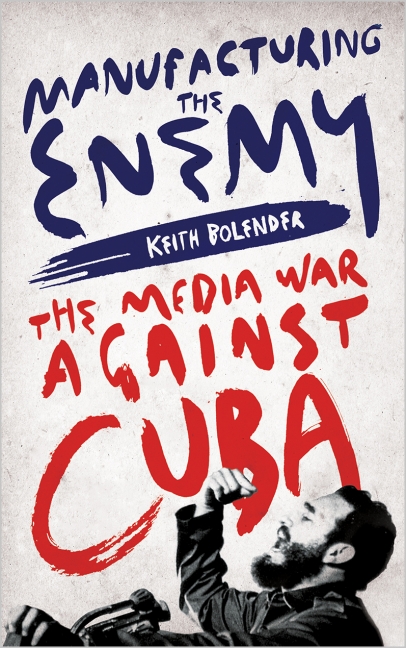 The Media War Against Cuba

How has the US media constructed our understanding of Cuba?
Mainstream media in the United States for the past 60 years has converged with the neo-colonial foreign policy objectives of the state to create a misinformed, biased narrative against the Cuban revolution. Using extensive examples, including pre-revolutionary historic coverage, journalist Keith Bolender reveals how the national press has established an anti-Cuba chronicle in adherence to Washington's unrelenting regime change policies.

From coverage of the Bay of Pigs, Cuban Missile Crisis, the Cuban Five and the current issues of Obama's 'Cuban Thaw' in 2014 to the renewed hostility under the Trump Administration, the edition examines with specific clarity how damaging corporate media treatment of Cuba is to the understanding of the revolution and those who continue to support it.

This original treatment scrutinises the foundation for the media’s hostility against Cuba's socialist political/economic system, providing new insight into the propaganda workings of the so called 'free' press in the US and across Western liberal democracies. The work is a unique resource for activists, journalists and students interested in the ever-complicated relationship between the United States and its island neighbour to the south.

Keith Bolender is a freelance journalist who worked for more than 10 years with the Toronto Star. He is the author of Voices From the Other Side: An Oral History of Terrorism Against Cuba (Pluto, 2010). He is a member of the Institute for Public Accuracy on their Roster of Experts for Cuban Affairs, and lectures at the University of Toronto School of Continuing Studies.

'Punishment of Cuba by the Master of the Hemisphere for what the State Department called its 'successful defiance' is one or the more sordid episodes of the past 60 years, enhanced by media coverage that all too often adheres reflexively to the Party Line. Keith Bolender performs a valuable service in dissecting this dismal record of journalistic treachery' - Noam Chomsky 'No aspect of the American obsessive compulsive fixation on Cuba stands in sharper relief than the role of the media in transacting the premise of empire. And no study of the media and Cuba surpasses the scope of this book' - Louis A. Pérez, Jr, J. Carlyle Sitterson Professor of History at the University of North Carolina at Chapel Hill, author of 'Cuba: Between Reform and Revolution', 5th edition (Oxford University Press, 2014).
Acknowledgements
Introduction
1. Media Control of Cuban History
2. The Media versus the Revolution
3. The Case of the Cuban Five
4. The Media Opens and Closes Against Cuba
5. Future Coverage
Notes
Bibliography
Index
Published by Pluto Press in Sep 2019
Paperback ISBN: 9780745340265
Hardcover ISBN: 9780745340289
eBook ISBN: 9781786805690