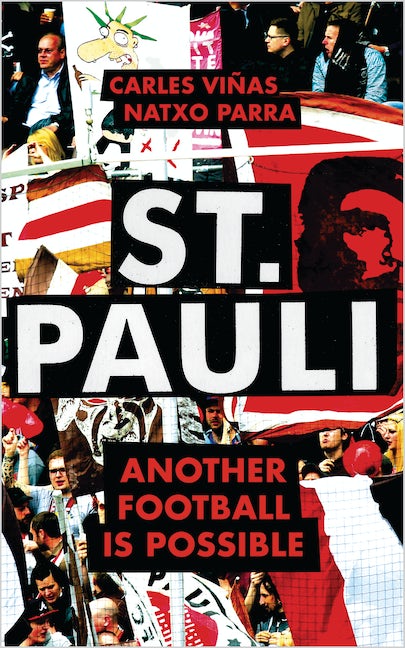 Another Football is Possible

by Carles Viñas and Natxo Parra

From German unification to the birth of the Bundesliga and beyond, this book tells the history of Germany’s cult football club and its famously left wing fan base

FC St. Pauli is a football club unlike any other. Encompassing music, sport and politics, its fans welcome refugees, fight fascists and take a stand against all forms of discrimination. This book goes behind the skull and crossbones emblem to tell the story of a football club rewriting the rulebook.

Since the club's beginnings in Hamburg's red-light district, the chants, banners and atmosphere of the stadium have been dictated by the politics of the streets. Promotions are celebrated and relegations commiserated alongside social struggles, workers' protests and resistance to Nazism. In recent years, people have flocked from all over the world to join the Black Bloc in the stands of the Millerntor Stadium and while in the 1980s the club had a small DIY punk following, now there are almost 30,000 in attendance at games with supporters across the world.

In a sporting landscape governed by corporate capitalism, driven by revenue and divorced from community, FC St. Pauli demonstrate that another football is possible.

Natxo Parra is a labour lawyer and cooperative partner. He is co-author of 'The Concept of Radicalization' in Jihadist Islam (Tirant lo Blanch, 2015).

Luke Stobart is an academic and writer, as well as a translator and interpreter. He is a lecturer in Spanish history and politics at King's College, London, and economic history at the Universitat Autònoma de Barcelona. He is currently writing a book on contemporary left-wing politics and movements in the Spanish state.

'Football has always been tribal, but this book shows how tribalism can be a force for good. Radicalism, social inclusion and joy all have their place on the terraces; there's more than one Marcus Rashford out there!'

- Cas Mudde, author of The Far Right Today (Polity, 2019) and host of the podcast RADIKAAL

'A fascinating history of the football club, and explain how politics, music, art and sport combine on the terraces in the fight against discrimination. A powerful and mesmerising book about football, and how it can be a force for good in an often corrupt and capitalist world'

'A timely reminder of the power of the football club, as a cultural and societal institution, in many ways more powerful than a religious place of worship or a town hall'

Acknowledgements
Foreword by Deniz Naki
Abbreviations
Preface
PART I - INFORMAL BEGINNINGS
1. The Birth of German Football
2. Football Reaches Hamburg, Sankt Pauli is Founded
3. The Club’s Early Years
PART II - WAR AND PEACE: FROM THE THIRD REICH TO THE BUNDESLIGA
4. Sankt Pauli under the Swastika
5. Postwar Successes and the Magnificent Eleven
6. The New Millerntor Stadium
7. Creation of the German League
PART III - CULT PIRATES OF THE LEAGUE
8. From the Regional Leagues to the Second Division
9. Transition from Neighbourhood to Kult Club
10. Fußball Gegen Nazis
PART IV - STANDS WITH A CONSCIENCE
11. A Unique Mix of Football and Social Projects
12. The Rebel’s Choice of St. Pauli-Celtic
13. From Hell to Centenary
14. Social Romantics Try to Reclaim the Club
15. Stadium Ultras’ Antifascism in 2002
PART V - ST. PAULI: PASSION WITHOUT BORDERS
16. Global Expansion and the Fan Clubs in England, Scotland and Ireland
17. The Unfinished Business of Women’s Football
18. Music, Democracy and Solidarity in the District and Stadium
19. St. Pauli is the Only Option
Epilogue: Against Modern Football
Bibliography
Index

St Pauli:
Another Football is Possible

Footballer Deniz Naki talks about his time at St. Pauli, and how the club inspired him to become a part of the Kurdish struggle and fight injustice across the world.

END_OF_DOCUMENT_TOKEN_TO_BE_REPLACED
Back to Top
X