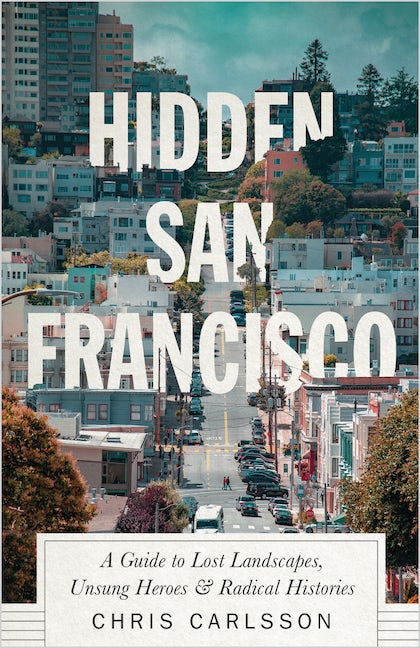 A Guide to Lost Landscapes, Unsung Heroes and Radical Histories

A radical, alternative guidebook to the history of San Francisco, complete with maps detailing walking and bike routes around the city.

San Francisco is an iconic and symbolic city. But only when you look beyond the picture-postcards of the Golden Gate Bridge and the quaint cable cars do you realise that the city's most interesting stories are not the Summer of Love, the Beats or even the latest gold rush in Silicon Valley.*BR**BR*Hidden San Francisco is a guidebook like no other. Structured around the four major themes of ecology, labour, transit and dissent, Chris Carlsson peels back the layers of San Francisco's history to reveal a storied past: behind old walls and gleaming glass facades lurk former industries, secret music and poetry venues, forgotten terrorist bombings, and much more. Carlsson delves into the Bay Area’s long prehistory as well, examining the region's geography and the lives of its inhabitants before the 1849 Gold Rush changed everything, setting in motion the clash between capital and labour that shaped the modern city.*BR**BR*From the perspective of the students and secretaries, longshoremen and waitresses, Hidden San Francisco uncovers dozens of overlooked, forgotten and buried histories that pulse through the streets and hills even today, inviting the reader to see themselves in the middle of the ongoing, everyday process of making history together.

'San Francisco is long overdue for a history like this! Smart and accessible, this is a book that everyone who has left a piece of their heart in the city needs to read. Its vibrant stories of the past are invaluable tools for charting a sustainable, inclusive future'

'The history of San Francisco I've been waiting for. It not only reorients our conceptions of the past, it gives us walking tour itineraries so we can viscerally experience how we are participants in the region's remaking.'

'Brings erudition, curiosity and passionate progressivism to a remarkably wide range of subjects - from the city's profaned natural glories, to little-known episodes in its labor history, to a Homeric list of people, organizations and movements that have tried to throw a spoke in the grinding cogs of various incarnations of The Establishment.'

- Gary Kamiya, author of the bestselling 'Cool Gray City of Love: 49 Views of San Francisco' (Bloomsbury, 2013); writer for 'Portals of the Past' history column in the San Francisco Chronicle

'Every city needs and deserves a Chris Carlsson. San Francisco is fortunate to have him and 'Shaping San Francisco,' not just because history from below is worth remembering, but more importantly because it is full of possibilities we should never forget for the present and future of The City'

- Jon Christensen, adjunct assistant professor in the Institute of the Environment and Sustainability, the Department of History, and the Center for Digital Humanities at the University of California, Los Angeles.

'Few people know the streets of San Francisco as well as Chris Carlsson. Sadly, gentrification is fast ripping the heart out of a city that generations of artists, immigrants, and working-class radicals have made into a unique and wondrous place. This book, thus, can be read as an obituary for his beloved home or, perhaps, a call to arms to renew the city again'

'Unlike your conventional guide books telling you where to shop, eat, and be entertained, this is a dissenter's guidebook that invites you into a holistic view of the City - bringing to life the stories of everyone from the hot politicians and their corporate paymasters to the streetcar conductors, secretaries, and construction workers who built the city and keep it running'

- Peter Booth Wiley, publisher and author who has written on the history of San Francisco for half a century

'Scores of sparkling vignettes - from Mission Rock to the Haight, Balmy Alley to Telegraph Hill - illuminate the city with the torch of social criticism and the sharp lens of a local sage. This is history from below at its best and a guidebook through the byways of collective memory'

- Richard Walker, Professor Emeritus, UC Berkeley, author of 'Pictures of a Gone City: Tech and the Dark Side of Prosperity in the San Francisco Bay Area' (PM Press, 2018).

'An original, vivid people's history of the nation's 'Left Coast City'. Photos, maps, and self-guided tours of over one hundred of the most important and iconic historic places and spaces bring to life the authors' beautifully crafted and well-informed San Francisco stories'

'With the city awash these days with more and more newcomers, 'Shaping San Francisco' is more vital than ever for keeping us all connected to the wild, weird, and radical histories that make this place so special. Dig into it, it's full of gold'

END_OF_DOCUMENT_TOKEN_TO_BE_REPLACED
Back to Top
X