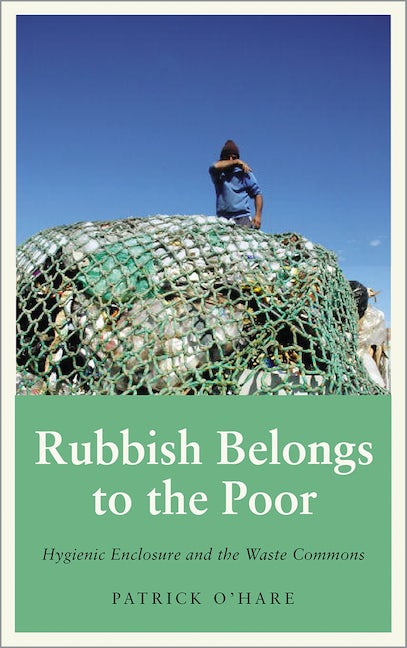 Rubbish. Waste. Trash. Whatever term you choose to describe the things we throw away, the connotations are the same; of something dirty, useless and incontrovertibly 'bad'. But does such a dismissive rendering mask a more nuanced reality?

In Rubbish Belongs to the Poor, Patrick O'Hare journeys to the heart of Uruguay's waste disposal system in order to reconceptualize rubbish as a 21st century commons, at risk of enclosure. On a giant landfill site outside the capital Montevideo we meet the book's central protagonists, the 'classifiers': waste-pickers who recover and recycle materials in and around its fenced but porous perimeter. Here the struggle of classifiers against the enclosure of the landfill, justified on the grounds of hygiene, is brought into dialogue with other historical and contemporary enclosures - from urban privatizations to rural evictions - to shed light on the nature of contemporary forms of capitalist dispossession.

Supplementing this rich ethnography with the author's own insights from dumpster diving in the UK, the book analyses capitalism's relations with its material surpluses and what these tell us about its expansionary logics, limits and liminal spaces. Rubbish Belongs to the Poor ultimately proposes a fundamental rethinking of the links between waste, capitalism and dignified work.

‘Written with a clear and convincing prose, this book makes a major contribution to and advances waste studies, environmental studies, and the anthropology of infrastructure by updating our extant theories of labor, the economy, and the commons. This book will not only serve as a useful teaching resource but also as a model for future scholars’

- Zsuzsa Gille, Professor of Sociology and Director of Global Studies, University of Illinois at Urbana-Champaign

‘Activist scholarship of the highest calibre. This is an intimate, humorous and razor-sharp analysis of the politics of urban waste. O’Hare mounts a passionate defence of waste as commons, in the face of corporate and state initiatives to reconfigure waste as resource’

'A compelling ethnography of Uruguayan waste pickers. This important intervention asks who has the economic and moral right to the surplus and excess that drive capitalism. As O'Hare shows, the waste pickers lay claim to this resource as part of a dialogue with environmental and social justice, through practices of care and commoning'

'By lingering with waste workers in Montevideo, Uruguay, O'Hare intricately unfolds the changing conditions of rubbish as it circulates through scavenging practices, urban infrastructures, circular economies, and global property structures. ‘Rubbish Belongs to the Poor’ offers a radically different view of how to shape environmental citizenships.'

'Radically rethinks the commons, urban infrastructure, and waste in ways that hold significant political implications for our time. Patrick O'Hare calls us to take seriously the work of waste reclaimers not as a problem in need of a solution, but rather, as a source of a new kind of politics'

'A compelling account. O'Hare offers an important corrective to the framings of waste we encounter in mainstream environmentalist circles, which understand waste as a problem of hygiene and which therefore tend to support the very modes of dispossession O'Hare so powerfully describes'