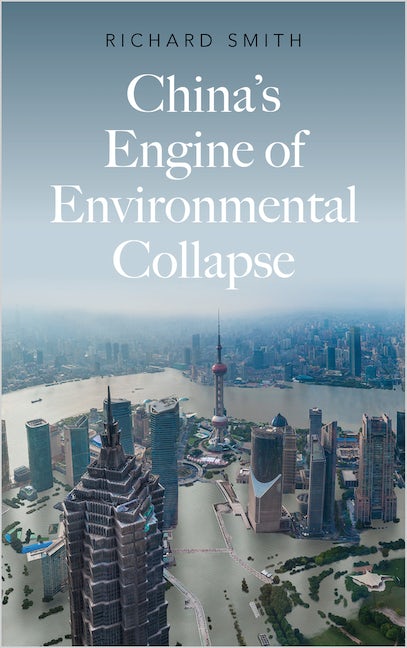 Authoritarianism, capitalism and destruction: why China is leading the world to ecocide

As the world hurtles towards environmental oblivion, China is leading the charge. The nation's CO2 emissions are more than twice those of the US with a GDP just two-thirds as large. China leads the world in renewable energy yet it is building new coal-fired power plants faster than renewables. The country's lakes, rivers, and farmlands are severely polluted yet China's police state can't suppress pollution, even from its own industries.

This is the first book to explain these contradictions. Richard Smith explains how the country's bureaucratic rulers are driven by nationalist-industrialist tendencies that are even more powerful than the drive for profit under 'normal' capitalism. In their race to overtake the US they must prioritise hyper-growth over the environment, even if this ends in climate collapse and eco-suicide.

Smith contends that nothing short of drastic shutdowns and the scaling back of polluting industries, especially in China and the US, will suffice to slash greenhouse gas emissions enough to prevent climate catastrophe.

Richard Smith wrote his PhD thesis on China’s economic reforms and has written extensively Chinese issues for New Left Review, Monthly Review, Real-World Economics Review, and Ecologist. He has also written essays collected in Green Capitalism: The God that Failed (2016) and in The Democracy Collaborative’s Next System Project (2017). Smith is also a founding member of the US-based group System Change Not Climate Change.

'Tracing China's environmental collapse to the Communist strategy of growth at all cost, this book deepens our understanding of China's massive impact on human sustainability. A bold, independent and necessary voice!'

'In this brilliant and strikingly original book, which has no equivalent in the existing literature on China, Richard Smith argues that the present hybrid bureaucratic-collectivist capitalist Chinese economy, driven by 'blind growth' and consumerism, is as unsustainable and ecocidal as its Western capitalist rivals. For both, the time for half measures has passed: only ecosocialism can save the planet, i.e. humanity,  from environmental collapse.'

- Michael Löwy, author of 'Ecosocialism: A Radical Alternative to the Capitalist Catastrophe' (Haymarket, 2010)

'Compassionate and powerful, Richard Smith envisions a new Chinese Dream through achieving a harmonious coexistence between human and nature. The book argues for a 21st Century ecosocialist democracy by calling for a "better mode of life" in China and the world.'

'A work of real insight. Richard Smith penetrates the defences of a fiercely autocratic regime to reveal how China’s predatory development strategy is imperilling not just itself but our entire planet.'

Preface
Acknowledgments
A Note on the Names of Rivers in this Volume
Introduction: China as an Environmental Rogue State
1. The “China Price”: Police-State Capitalism and the Great Acceleration of Global Consumption
2. “Blind Growth”: Scenes of Planetary Destruction from the Twelfth Five-Year Plan
3. The Damage Done: The Poisoning of China’s Water, Soil, and Foods
4. Cooking the Planet for What End?
5. China’s Engine of Environmental Collapse
6. Guanxi and the Game of Thrones: Wealth, Property, and Insecurity in a Lawless System
7. Grabbing the Emergency Brake
8. The Next Chinese Revolution
Appendix
References
Index