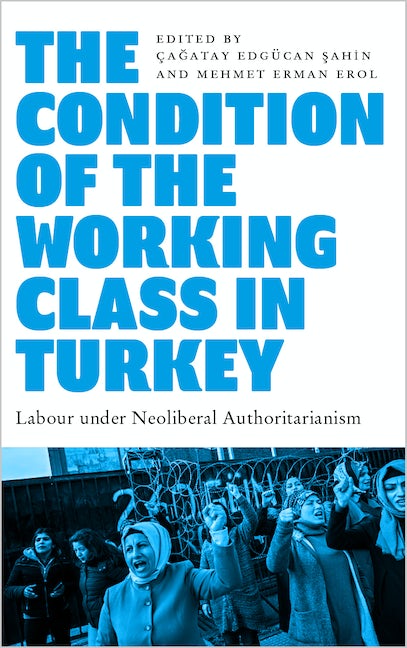 The Condition of the Working Class in Turkey

Decades of neoliberal authoritarianism have propelled Turkey into crisis. Regime change, economic disaster and Erdogan’s ambition to impose ‘one-man rule’ have shaken the foundations of Turkish political life, but what does this mean for workers?

Moving beyond the headlines and personalities, this book uncovers the real condition of the working class in modern Turkey. Combining field research and in-depth interviews, it offers cutting-edge analyses of workplace struggles, trade unionism, the AKP’s relationship with neoliberalism, migration, gender, agrarian change and precarity, as well as the Covid-19 pandemic and its impact on workers.

Bringing together Turkish activists and scholars, this book is an inside look at the dynamics and contradictions of working-class resistance against Turkey’s neoliberal authoritarian regime; from worker self-management to organised labour and rural struggles.

Çağatay Edgücan Şahin is an Associate Professor of Labour Economics at the University of Ordu, Turkey. He has published various books including Human Capital and Human Resources: A Critical Approach (2011).

Mehmet Erman Erol is a Postdoctoral Researcher at the University of Cambridge, UK. He has contributed to journals and books on Turkish & Middle East political economy and labour market restructuring.

'The most formative work in decades on the Turkish political economy and the devastation wrought by an authoritarian government on the country's workers. I highly recommend this book for all those who seek to understand the emergence of widespread resistance by an increasingly militant working class in Turkey'

- Immanuel Ness, Professor of Political Science at Brooklyn College of the City University of New York and author of 'Organizing Insurgency' (Pluto, 2020)

'A deep and timely analysis with an overarching narrative of the Turkish labor markets under the conditionalities of late capitalism [...] An indispensable resource on the economics of labor'

- A. Erinç Yeldan, Professor of Economics at Kadir Has University

'Impressively comprehensive [...] The contributions not only cover the sphere of production, but equally social reproduction including the importance of unpaid labour in patriarchal capitalist structures, as well as migration as a source of cheap labour. A must-read for everyone interested in the role of Turkish labour in the crisis-ridden 21st century'

'This excellent book is remarkable for its courageous and insightful analysis. Against the grain of the contemporary near silence about the struggles of society’s surplus value producers who make a living in miserable conditions, this volume articulates the suffering inflicted and brings to the fore the collective forms of resistance to that suffering'

List of Abbreviations
Acknowledgements
Introduction - Mehmet Erman Erol and Çağatay Edgücan Şahin
PART I: RESTRUCTURING
Neoliberal Restructuring of Labour and the State: From Military Dictatorship to the AKP Era
1. Not-So-Strange Bedfellows: Neoliberalism and the AKP in Turkey - Mehmet Erman Erol
2. Turkey’s Labour Markets Under Neoliberalism: An Overview - Kerem Gökten
3. Commodification and Changing Labour in Turkey: The Working Class in the Public Sector - Koray R. Yılmaz
4. Neoliberal Transformation of Turkey’s Health Sector and its Effects on the Health Labour Force - Sebiha Kablay
Gender, Migration and Rural Aspects of Neoliberal Restructuring
5. Between Neoliberalism and Conservatism: Recent Developments and New Agendas in Female Labour Policies in Turkey - Demet Özmen Yılmaz
6. The Making of the Rural Proletariat in Neoliberal Turkey - Coşku Çelik
7. Burden or a Saviour at a Time of Economic Crisis? AKP’s ‘Open-Door Migration Policy’ and its Impact on Labour Market Restructuring in Turkey - Ertan Erol
PART II: CONTAINMENT
8. Social Assistance as a Non-Wage Income for the Poor in Turkey: Work and Subsistence Patterns of Social Assistance Recipient Households - Denizcan Kutlu
9. A View of Precarisation from Turkey: Urban-Rural Dynamics and Intergenerational Precarity - Elif Hacısalihoğlu
10. When the Law is Not Enough: ‘Work Accidents’, Profit Maximisation and the Unwritten Rules of Workers’ Health and Safety in New Turkey - Murat Özveri
11. Are We All in the Same Boat? Covid-19 and the Working Class in Turkey - Yeliz Sarıöz Gökten
PART III: RESISTANCE
12. Reconsidering Workers’ Self-Management in Turkey: From Resistance to Workers’ Self-Management Possibilities/Constraints - Berna Güler and Erhan Acar
13. Organised Workers’ Struggles Under Neoliberalism: Unions, Capital and the State in Turkey - Çağatay Edgücan Şahin
Notes
Contributors
Index