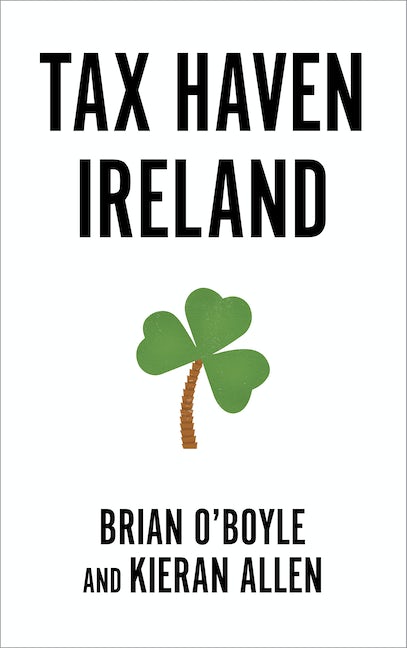 by Brian O'Boyle and Kieran Allen

This is the story of how a small island on the edge of Europe became one of the world’s major tax havens. From global corporations such as Apple and Google, to investment bankers and mainstream politicians, those taking advantage of Ireland’s pro-business tax laws and shadow banking system have amassed untold riches at enormous social cost to ordinary people at home and abroad.

Today, in the wake of Brexit and in the shadow of yet another economic crash, what can be done to prevent such dangerous behaviour and reorganise our economies to invest in the people? Can Ireland – and all of us – build an alternative economy based on fairness and democratic values?

Brian O'Boyle is a Lecturer in Economics at St Angela College, National University of Ireland, Galway. He has published in the areas of the philosophy of science, the history of economics and the global economy. He is the co-author of Durkheim (Pluto, 2017) and a contributor to Austerity Ireland (Pluto, 2013).

'Excellent insights and analysis showing how corporations and the rich are addicted to tax avoidance to the detriment of normal people. Informative and enjoyable to read'

- Prem Sikka, Professor of Accountancy at the University of Sheffield

'An important book - it exposes industrial scale tax avoidance being organised by the Irish elites and enjoyed by the world's major corporations. It blends detailed research with impressive insight. It deserves a wide readership'.

'An important book that deserves a wide readership. The claims that Ireland is a tax haven have been growing over recent years. This book adds important evidence to the claim and makes a passionate call for a more equal society'

- Professor Eoin Reeves, Head of the Department of Economics, University of Limerick, Ireland

'A policy of consistent denial by the government, along with lazy media treatment of the issue, has meant that Ireland's status as a tax haven is an ongoing controversy. This book goes a long way in resolving this argument'

'An extremely important, and possibly the best, book to have been written about one of the world's biggest and most dangerous tax havens. It skewers the self-serving myths of crooked Irish elites to show how going down the tax haven route not only inflicts harm on other countries - it hurts its own population too'