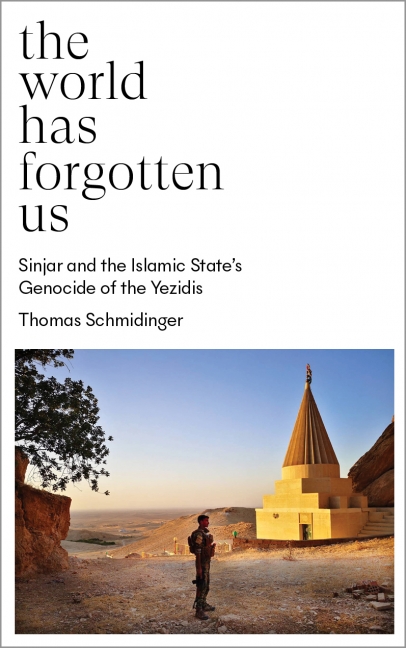 The World Has Forgotten Us

Sinjar and the Islamic State’s Genocide of the Yezidis

The persecution of the Yezidis, a Gnostic religious community originating in Upper Mesopotamia, has been ongoing since at least the 10th century. On 3 August 2014, Islamic State attacked the Yezidi community in Sinjar, Kurdistan. Thousands were enslaved or killed in this genocide, and 100,000 people fled to Mount Sinjar, permanently exiled from their homes.

Here, Thomas Schmidinger talks to the Yezidis in Iraq who tell the history of their people, why the genocide happened and how it affects their lives today. This is the first full account of these events, as told by the Yezidis in their own words, to be published in English.

The failure of the Kurdistan Peshmerga of the PDK in Iraq to protect the Yezidis is explored, as is the crucial support given by the Syrian-Kurdish YPG. This multi-faceted and important history brings the fight and trauma of the Yezidis back into focus, calling for the world to remember their struggle.

Thomas Schmidinger is a Political Scientist and Cultural Anthropologist based at the University of Vienna. He is Secretary General of the Austrian Association for Kurdish studies. He is the author of Rojava, which received the Mezlum Bagok award.

'The discrimination, exclusion and persecution of the Yezidis did not just begin in 2014 with the so-called Islamic State. Thomas Schmidinger shows with great dedication the anatomy of a subtle genocide against the Yezidis in last two hundred years'

'An important book delving into the history and recent memory of the community, a vivid reminder of how the past and present of the Yezidis continue to be painfully intertwined'

'Thomas Schmidinger is one the best experts on the region. This book is a must read'

'Fills a void in the literature. Through impressive first-hand documentation, the book explains the culture and history of this unique community in sympathetic terms and details the rapacious genocidal aggression of ISIS to obliterate this ancient Mesopotamian community'

Acknowledgements
Preface to the English edition
Timeline
Abbreviations
Maps
Introduction
Part I History of Sinjar and the genocide
1. The Sinjar Mountains as a natural space
2. Sinjar in ancient times
3. From the Islamic conquest to the periphery of the Ottoman Empire
4. The religion of the Êzîdî
5. Social order and religious office-holders of the Êzîdî
6. The tribal society in Sinjar
7. Sinjar in the late Ottoman Empire
8. The British occupation and protectorate
9. The Êzîdî in Iraq
10. Resentments against the Êzîdî
11. Ethno-confessional groups in the Sinjar region: Êzîdî, Christians, Jews and Muslims
12. Sinjar under the rule of the Ba’th Party
13. After the fall of Saddam Hussein: between Baghdad and Erbil
14. The massacre of 14 August 2007: the 73rd firman?
15. Encircled by jihadists
16. The IS genocide in August 2014
17. Genocide
18. The reintroduction of slavery and sexual violence
19. Struggle for liberation: regional conflicts in the smallest spaces
20. The life of the displaced
21. Regional conflicts: Sinjar in the crosshairs of Turkey and Iran
22. Marginalised and instrumentalised: is there a future for the Êzîdî in Iraq?
Part II Photographs
Part III Interviews
Notes
Bibliography
Index