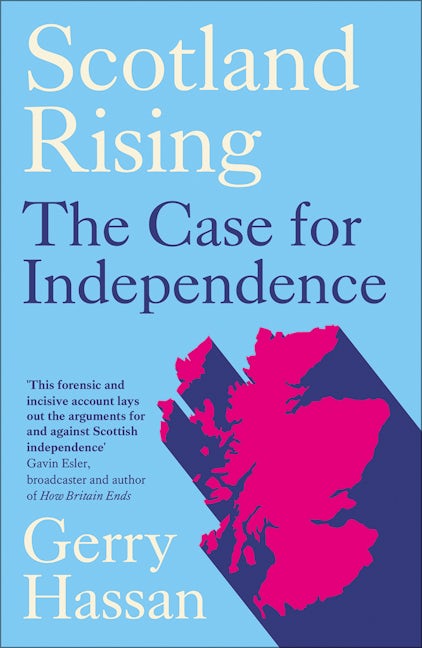 The Scottish independence question is one of the pivotal questions facing British politics and the future of the United Kingdom. It is also one of the most contentious and misunderstood.

In Scotland Rising, Gerry Hassan addresses the fundamental questions covering the Scottish independence debate so that people can better understand the case for independence and the nuances, contours and implications for the whole United Kingdom. Looking beyond the merits and shortcomings of the SNP and the Conservative government in Westminster, Hassan tackles the larger driving dynamics of 'the Scottish Question' - a growing desire amongst many Scots for an explicit discussion about society, public policy choices and wider values.

Addressing the constitutional framework, and questions about the role of government and democracy, the nature of the British state, society and capitalism, Scotland Rising makes an urgent and intelligent contribution to one of the defining political questions of our time.

Gerry Hassan is a leading commentator on Scottish politics and independence. He is Professor of Social Change at Glasgow Caledonian University and the author of many books including The Strange Death of Labour Scotland, The People’s Flag and the Union Jack and Caledonian Dreaming. He has written for The Guardian, openDemocracy, Bella Caledonia, The Scotsman, New Statesman and the Irish Times.

'Readable, thoughtful and sharp-edged [...] Hassan’s incisive and respectful account lays out the arguments for and against Scottish independence'

- Gavin Esler, broadcaster and author of ‘How Britain Ends'

'A comprehensive, well-sourced and very wide-ranging discussion of the strengths and weaknesses of Scotland's independence movement, as it faces the challenges of a second referendum. Hassan shows how sterile the extreme arguments of unionist and nationalist can be'

'A careful consensual account of how Scotland has come to be at the brink of independence, and of what this choice means for those who are not who are not yet committed either way. A clear description of what has changed since 2014 leading to a forensic examination of the implications for independence of the new context: a far less self-assured British elite. And a clear warning of just how nasty this debate is likely to become, across the UK'

'Scotland needs this book. Read it. Give to your grandparents and grandkids. Put it on reading lists for students. Make sure it’s in the libraries. It’s one of the new pillars which we need to structure our thinking'

- Alison Phipps, Professor of Languages & Intercultural Studies and UNESCO Chair for Refugee Integration through Languages and the Arts at University of Glasgow

'The definitive account of why a decaying democracy in Westminster has triggered democratic renewal in Scotland through the desire for Independence. [This] book is essential reading for everyone who wants to understand the future of the UK, whether it breaks up or how it reconfigures itself'

'This book’s distinction lies not just in its breadth of coverage, but in the light it sheds upon contesting points of view, and the depth to which it recognises identity, culture and the power of myth in Scottish independence. It emphasises the urgency of understanding opposing arguments to aid social change: an ability sadly lacking in most of the political world'

- Alastair McIntosh, human ecologist and author of 'Riders on the Storm'

'This is a very welcome contribution on the Scotland’s future that recognises that Scotland’s constitutional future cannot be divorced from the kind of society and economy and this requires tough, honest choices. Not everyone will agree with Gerry’s prescriptions but everyone should welcome this important, stimulating and serious book'

'Too often arguments for or against Scottish independence are framed in short-termist narrow terms that reflect the confines of current - and flawed - economic debates. This book breaks out of today's thinking and looks to the bigger and deeper issues at stake'

'Scotland’s future and our constitutional choices warrant deeper, richer debate – debate that allows for imaginative ideas, candid questioning and respect for diversity. With clarity and substance, this book speaks to important issues inherently implicated in such debates, thinking about what’s at stake and why it matters'

‘Scotland’s future is not just about narrow politics, but the cultural realm, power of stories and drawing from the richness of the human imagination. [This] is a clarion call for that wider canvas challenging the closed order of too many of our debates and should be read by anyone interested in the future of this nation irrespective of their views’

Part I: The Terrain of the Debate
1. The Scottish Question(s)
2. Nation, Stories and Voice

Part II: The Story So Far
3. The Road to the Independence Debate: How Did We Get Here?
4. The Case for Independence
5. Understanding the Case Against Independence

Part IV: The Shape of Things to Come
12. How Scotland Gets an Independence Referendum
13. The Next Campaign

Part V: Future Landscapes
14. After an Independence Vote
15. The Future of the UK/rUK after Independence
16. Scotland’s Right to Decide
17. Future Stories of Scotland