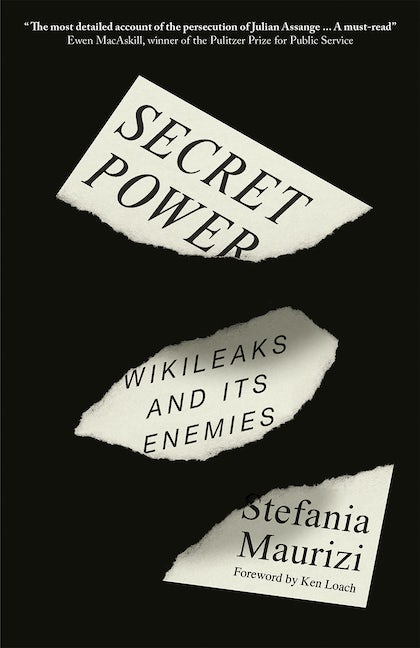 *Please note, this book is not included in our seasonal sale*

'I want to live in a society where secret power is accountable to the law and to public opinion for its atrocities, where it is the war criminals who go to jail, not those who have the conscience and courage to expose them.'

It is 2008, and Stefania Maurizi, an investigative journalist with a growing interest in cryptography, starts looking into the little-known organisation WikiLeaks. Through hushed meetings, encrypted files and explosive documents, what she discovers sets her on a life-long journey that takes her deep into the realm of secret power.

Working closely with WikiLeaks' founder Julian Assange and his organisation for her newspaper, Maurizi has spent over a decade investigating state criminality protected by thick layers of secrecy, while also embarking on a solitary trench warfare to unearth the facts underpinning the cruel persecution of Assange and WikiLeaks.

With complex and disturbing insights, Maurizi's tireless journalism exposes atrocities, the shameful treatment of Chelsea Manning and Edward Snowden, on up to the present persecution of WikiLeaks: a terrifying web of impunity and cover-ups.

At the heart of the book is the brutality of secret power and the unbearable price paid by Julian Assange, WikiLeaks and truthtellers.

Stefania Maurizi is an Italian investigative journalist working for the daily Il Fatto Quotidiano, having previously reported for La Repubblica and l'Espresso. She began working with Julian Assange and WikiLeaks in 2009 for her newspaper. Among international journalists, she is the only one who has worked on the entirety of the WikiLeaks secret documents and the only one who has conducted a multi-jurisdictional litigation to defend the right of the press to access the full documentation on the WikiLeaks case.

'The vindictive hounding of Julian Assange by the US government deserves as wide an audience as possible. There is no journalist better placed to tell the story than Stefania Maurizi. This Italian journalist has been following the story of Assange and WikiLeaks closely for more than a decade and personally knows most of those involved. But what stands out is her sheer perseverance.  Many journalists would have given up after her multiple requests under the Freedom of Information Act were largely rebuffed by governments in the UK, US, Sweden and Australia. But she proved dogged, engaging in what she describes as ‘trench warfare', taking them to court, the legal costs often paid for by her personally. Through this persistence, she uncovered lots of new information.

As well as being the most detailed account of the persecution of Julian Assange, Maurizi weaves in the stories of whistle-blowers such as Chelsea Manning and Edward Snowden, making it one of the most comprehensive accounts yet of the battle between the national security apparatus and advocates of privacy and press freedom. It should be a must-read for all journalists. If Assange can be persecuted on the flimsy grounds exposed by Maurizi, then all journalists anywhere in the world who challenge the US are at risk.'

'A rigorous, compelling and highly readable reconstruction of the WikiLeaks case. I highly recommend this work. No one conveys better the urgency of averting the extradition and prosecution of Assange'

- Daniel Ellsberg, US whistleblower who leaked the Pentagon Papers

'Maurizi's relentless, rigorous and courageous work has produced compelling evidence for the flagrant and deliberate illegality of Julian Assange's persecution. She has decisively contributed to my official investigation into the case as the United Nations Special Rapporteur on Torture'

'Stefania Maurizi's book on the persecution of Julian Assange is the definitive text on this tragedy. To read it is to resist, it is a must read. Free Assange'

'Stefania Maurizi's revelation of the role of the UK Crown Prosecution Service, then run by Keir Starmer, in the persecution of Julian Assange was a journalistic landmark. Her book is a lesson to all who expose the malign secrets of state power'

'Heroic freedom-fighter or maverick controversialist - Assange is a polarising character. But we can all agree that the classified documents he published revealed much of the heinous barbarity of the post 9/11 US-led wars. This book is a passionate plea in Julian's defence. To extradite would send the message that no journalist or publisher is safe anywhere in the world'

'Everything you think you know about this story is not what you think. Maurizi brilliantly tells the real story of what happened with WikiLeaks and the powers that went out to destroy it'

'The best possible tribute to Julian Assange's sacrifice on behalf of Western citizens whose governments have been committing, in their name, crimes against humanity. Stefania Maurizi has sacrificed much to write this book, making it a book to read, behold and promote to anyone who cares about the truth'

- Yanis Varoufakis, Professor of Economics at the University of Athens

'An exceptional book by an exceptional journalist. Written like a political thriller, 'Secret Power' is not only one of the best accounts of the WikiLeaks revolution and the man behind it. It's also a deeply disturbing investigation into the military-intelligence complex and secret power determined to dismantle the last strongholds of democracy, namely freedom of the press'

- Srecko Horvat, philosopher and author of 'Poetry from the Future'

'The story of the aftermath of the biggest story in journalism in generations brilliantly laid out by Maurizi. A must read for everyone interested in finding out how democratic and free, the 'free and democratic west' indeed is.'

- Thomas A. Drake, whistleblower and former senior executive of the National Security Agency

'Masterful…Maurizi has very likely produced the definitive version of the WikiLeaks story, and it’s a page-turner to boot'

Foreword by Ken Loach
Introduction: The Man Who Stood Up to Secret Power
1. The Wikileaks Revolution
2. The Exceptional Courage of Chelsea Manning
3. Afghanistan: The Faraway War
4. The Cypherpunk
5. A Database from Hell: the Iraq War Logs
6. Rattling Power at the Highest Levels: Cablegate
7. Guantanamo: The Black Hole of Civilisation
8. "The Huffington Post gang is driving me nuts"
9. From Sweden to Ecuador
10. No Place for Protection
11. My Trench Warfare to Unearth the Truth
12. Arbitrarily Detained
13. A Russian Connection?
14. The Fury of the CIA
15. Under Siege
16. The Final Attempts
17. In the Would-be Guantanamo
18. 175 Years for the Crime of Journalism
19. Only Kafka
20. A Monstrous Injustice
21. Secret Power
Acknowledgments