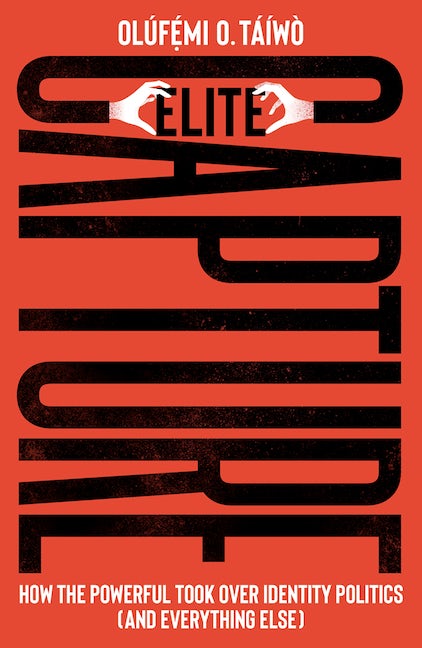 How the Powerful Took Over Identity Politics (And Everything Else)

Identity politics is everywhere, polarising discourse from the campaign trail to the classroom and amplifying antagonisms in the media. But the compulsively referenced phrase bears little resemblance to the concept as first introduced by the radical Black feminist Combahee River Collective. While the Collective articulated a political viewpoint grounded in their own position as Black lesbians with the explicit aim of building solidarity across lines of difference, identity politics is now frequently weaponised as a means of closing ranks around ever-narrower conceptions of group interests.

But the trouble, Olúfẹ́mi O. Táíwò deftly argues, is not with identity politics itself. Through a substantive engagement with the global Black radical tradition and a critical understanding of racial capitalism, Táíwò identifies the process by which a radical concept can be stripped of its political substance and liberatory potential by becoming the victim of elite capture -deployed by political, social and economic elites in the service of their own interests.

Táíwò’s crucial intervention both elucidates this complex process and helps us move beyond the binary of 'class’ vs. ‘race’. By rejecting elitist identity politics in favour of a constructive politics of radical solidarity, he advances the possibility of organising across our differences in the urgent struggle for a better world.

Olúfẹ́mi O. Táíwò is Assistant Professor of Philosophy at Georgetown University. His work draws liberally from the Black radical tradition, anti-colonial thought, German transcendental philosophy, contemporary philosophy of language, contemporary social science, and histories of activism and activist thinkers. His public philosophy, including articles exploring intersections of climate justice and colonialism, has been featured in The New Yorker, The Nation, Boston Review, Dissent, The Appeal, Slate, Al Jazeera, The New Republic, Aeon, and Foreign Policy. He is the author of the book Reconsidering Reparations.

‘Worth sitting with and absorbing. While critically examining what happens when elites hijack our critiques and terminologies for their own interests, Elite Capture acutely reminds us that building power globally means we think and build outside of our internal confines. That is when we have the greatest possibility at worldmaking’

- Ibram X. Kendi, National Book Award-winning author of ‘How to Be an Antiracist’

- Ruth Wilson Gilmore, author of ‘Change Everything: Racial Capitalism and the Case for Abolition’

‘Olúfémi O. Táíwò is a thinker on fire. He not only calls out empire for shrouding its bloodied hands in the cloth of magical thinking but calls on all of us to do the same. Elite capture, after all, is about turning oppression and its cure into a neoliberal commodity exchange where identities become capitalism’s latest currency rather than the grounds for revolutionary transformation. The lesson is clear: only when we think for ourselves and act with each other, together in deep, dynamic, and difficult solidarity, can we begin to remake the world’

‘Coursing with moral urgency and propelled by brilliant prose, this is more than argument. It's how we build the power needed to win’

- Naomi Klein, author of ‘This Changes Everything’ (on his previous book)

- Amitav Ghosh, author of the Booker-shortlisted 'Sea of Poppies'

'Anyone concerned with both understanding and transforming the world must read this succinct but mighty book. A invigoratingly subversive gem'

‘This book, building on one of the most lucid, powerful, and important essays I can recall reading in recent years, is, in a word, brilliant. Read it—and read it twice. Every sentence contains multitudes.’

- Daniel Denvir, host of The Dig

‘An indispensable and urgent set of analyses, interventions, and alternatives to ‘identity politics,’ ‘centering,’ and much more. The book offers a sober assessment of the state of our racial politics and a powerful path on how to build the world that we deserve’

‘With global breadth, clarity and precision, Olúfẹ́mi O. Táíwò dissects the causes and consequences of elite capture and charts an alternative constructive politics for our time. The result is an erudite yet accessible book that draws widely on the rich traditions of black and anticolonial political thought’

- Adom Getachew, author of ‘Worldmaking after Empire: The Rise and Fall of Self-Determination’

‘Among the churn of books on ‘wokeness’ and ‘political correctness,’ philosopher Olúfẹ́mi O. Táíwò’s Elite Capture clearly stands out. With calm, clarity, erudition, and authority, Táíwò walks the reader through the morass, deftly explicating the distinction between substantive and worthy critique and weaponized backlash. Understanding the culture wars is essential to US politics right now, and no one has done it better than Táíwò in this book.’

‘Olúfẹḿi O. Táíwò is one of the great social theorists of our generation. Elite Capture is a brilliant, devastating book. Táíwò deploys his characteristic blend of philosophical rigor, sociological insight, and political clarity to reset the debate on identity politics. Táíwò shows how the structure of racial capitalism, not misguided activism, is today’s prime threat to egalitarian, anti-racist politics. And Táíwò’s suggested path forward, a constructive and materialist politics at the radical edge of the possible, is exactly what we need to escape these desperate times. Anyone concerned with dismantling inequalities, and building a better world, needs to read this book.’

- Daniel Aldana Cohen, co-author of ‘A Planet to Win: Why We Need a Green New Deal’

‘Táíwò's book is an insightful and fascinating look at how it is that elites capture and subvert efforts to better society. Anyone who wants to understand and improve upon the activist movements shaking our world needs to read this book.’

‘The misuse of identity politics has led to Nancy Pelosi wearing kente cloth but has done little to address actual inequality. Táíwò’s project is reclamation’

'One of the most important books I’ve read for cultivating a dedication to progressive change, and for unscrambling some of the cultural frustration of capitalism and its digital revolution'

- Emma Dabiri, research associate at SOAS University of London, and author of ‘What White People Can Do Next: From Allyship to Coalition’

Acknowledgments
Introduction
1. What Is Elite Capture?
2. Reading the Room
3. Being in the Room
4. Building a New House
5. The Point Is to Change It
Notes
Index