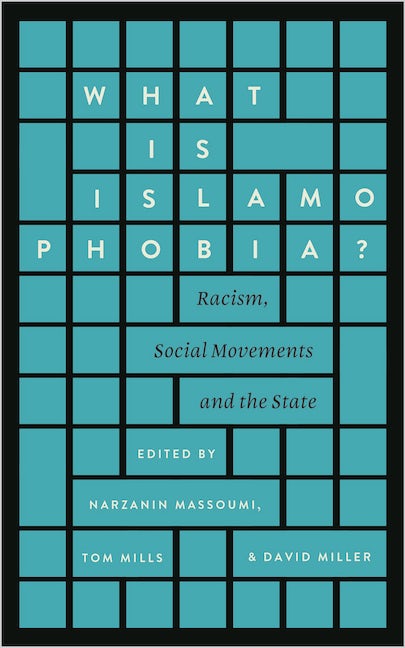 Racism, Social Movements and the State

Reveals the endemic nature of Islamophobia in the West across various sections of society, both left and right
As racist undercurrents in many western societies become manifestly entrenched, the prevalence of Islamophobia - and the need to understand what perpetuates it - has never been greater.

Critiquing the arguments found in notionally left accounts and addressing the limitations of existing responses, What is Islamophobia? demonstrates that Islamophobia is not simply a product of abstract, or discursive, ideological processes, but of concrete social, political and cultural actions undertaken in the pursuit of certain interests.

The book centres on what the editors refer to as the 'five pillars of Islamophobia': the institutions and machinery of the state; the far right, incorporating the counterjihad movement; the neoconservative movement; the transnational Zionist movement; and assorted liberal groupings including the pro-war left, and the new atheist movement. The book concludes with reflections on existing strategies for tackling Islamophobia, considering what their distinctive approaches mean for fighting back.

Narzanin Massoumi is a British Academy Postdoctoral Fellow (2016-19) at the University of Bath. She is the author of Muslim Women, Social Movements and the 'War on Terror' (Palgrave Macmillan, 2016) and the co-editor of What is Islamophobia? (Pluto, 2017).

Tom Mills is Lecturer in Sociology at Aston University. He is the author of The BBC: The Myth of a Public Service (Verso, 2016) and the co-editor of What is Islamophobia? (Pluto, 2017).

'A masterful volume, intellectually provocative ... it challenges the basic assumptions of the Islamophobia scholarship field ... A must read for any person concerned with the current period and the rising tide of bigotry and racism' - Hatem Bazian, founder of the Islamophobia Research and Documentation Project, University of California at Berkeley 'A remarkably courageous and painstakingly evidence-based book… This unique and much needed framework for understanding Islamophobia is a must read for social scientists, policy makers and human rights activists alike!' - Salma Yaqoob, Political Activist and Head of the Birmingham Stop the War Coalition 'The best study I have ever seen of this scourge that now plagues the world' - Joel Kovel, author of Overcoming Zionism (2007) and The Lost Traveller's Dream (2017) 'This important, thoughtful and disturbing book could not be more timely. The authors compel us to examine our institutions, face unwelcome facts, and revise some of our culturally entrenched positions and assumptions' - Karen Armstrong, author of A History of God
List of Tables
List of Figures
List of Acronyms
Acknowledgements
Part I: Introduction: What is Islamophobia?
1. Islamophobia, Social Movements and the State: For a Movement-centred Approach - Narzanin Massoumi, David Miller and Tom Mills
Part II: Islamophobia, Counter-terrorism and the State
2. Islamophobia as Ideology of U.S. Empire - Arun Kundnani
3. Islamophobia and Empire: An Intermestic Approach to the Study of Anti-Muslim Racism - Deepa Kumar
4. The U.K. Counter-terrorism Matrix: Structural Racism and the Case of Mahdi Hashi - Asim Qureshi
5. The ‘War on Terror’ and the Attack on Muslim Civil Society - Shenaz Bunglawala
Part III: Social Movements From Above
6. Mainstreaming Anti-Muslim Prejudice: The Rise of the Islamophobia Industry in American Electoral Politics - Nathan C. Lean
7. Terror Incognito: Black Flags, Plastic Swords and Other Weapons of Mass Disruption in Australia - Scott Poynting and Linda Briskman
8. Islamophobia, Counter-extremism and the Counterjihad Movement - Hilary Aked
9. The Transatlantic Network: Funding Islamophobia and Israeli Settlements - Sarah Marusek
10. The Neoconservative Movement: Think Tanks as Elite Elements of Social Movements from Above - Tom Griffin, David Miller and Tom Mills
11. Liberal and Left Movements and the Rise of Islamophobia - Narzanin Massoumi, Tom Mills and David Miller
Part IV: Fighting Back
12. Fighting Back: Challenging the State and Social Movements from Above - Narzanin Massoumi, Tom Mills and David Miller
Notes on Contributors
Index
Published by Pluto Press in Jun 2017
Paperback ISBN: 9780745399577
eBook ISBN: 9781786800695

END_OF_DOCUMENT_TOKEN_TO_BE_REPLACED
Back to Top
X