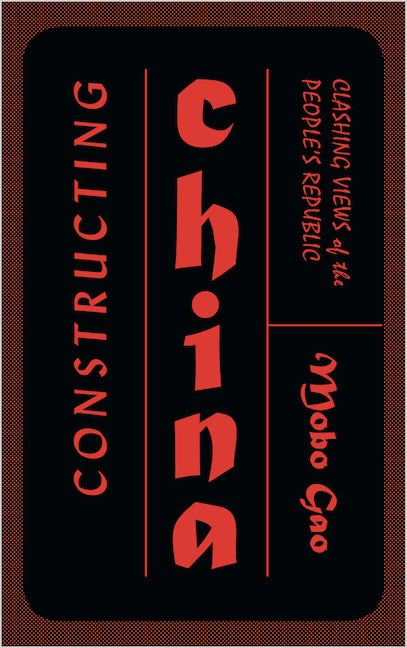 Clashing Views of the People's Republic

From West to East, Mobo Gao interrogates knowledge production; rejecting the supposed objectivity of empirical statistics and challenging the assumption of a dichotomy between the Western liberal democracy and Chinese authoritarianism. By examining issues such as the Chinese Neo-Enlightenment and neoliberalism, national interest vested in Western scholarship, representations of the Great Leap Forward and the Cultural Revolution, and the South China Sea, the book asks: how is contemporary China constructed?

By dissecting the political agenda and conceptual framework of commentators on China, Gao provocatively urges those not only on the Right, but also on the Left, to be self-critical of their views on Chinese politics, economics and history.

Mobo Gao is Professor of Chinese Studies at the University of Adelaide and the author of Constructing China (Pluto, 2018), The Battle for China's Past (Pluto, 2008).

'Mobo Gao is one of the most creative and stimulating thinkers on contemporary Chinese issues today. This splendid book on fundamental questions about what China is maintains his ability to target key questions which might often be asked, but seldom treated in such elegantly provocative fashion' - Kerry Brown, Professor of Chinese Studies and Director, Lau China Institute 'Mobo Gao intervenes in the increasingly tense ideological exchange that has accompanied China's challenge to the global hegemony of the West. Intimately familiar with the intellectual terrain in both worlds, Gao offers unique insights, at once indignant and introspective' - Joel Andreas, John Hopkins University, author of Rise of the Red Engineers: The Cultural Revolution and the Origins of China's New Class 'A bold, revisionist account citing much historical evidence and presenting interpretations that challenge mainstream views of China ...Gao makes a provocative case that will spark vigourous debate about the country and its leaders' motives' - Dorothy J. Solinger, Professor Emerita, University of California, Irvine 'This book engages a fundamental question in politics and history concerning discursive power. It is forcefully argued and highly stimulating. The compelling case Mobo Gao makes deserves broad attention for its significance and urgency in debating the hegemonic ascendance of revisionist historiography' - Lin Chun, author of China and Global Capitalism: Reflections on Marxism, History and Contemporary Politics (2013)
Abbreviations
Acknowledgements
Introduction
1. Scholarship, National Interest and Conceptual Paradigm
2. China, What China?
3. Chinese? Who are the Chinese?
4. Intellectual Poverty of the Chinese Neo-Enlightenment
5. The Coordinated Efforts in Constructing China
6. Why is the Cultural Revolution Cultural?
7. Why is the Cultural Revolution Revolutionary? The Legacies
8. Clashing Views of the Great Leap Forward
9. National Interest and Transnational Interest: The Political and Intellectual Elite in the West
10. Geopolitics and National Interest I: China’s Foreign Policy and Domestic Politics
11. Geopolitics and National Interest II: The South China Sea Disputes
Bibliography
Index
Published by Pluto Press in Jul 2018
Paperback ISBN: 9780745399812
Hardcover ISBN: 9780745399829
eBook ISBN: 9781786802439