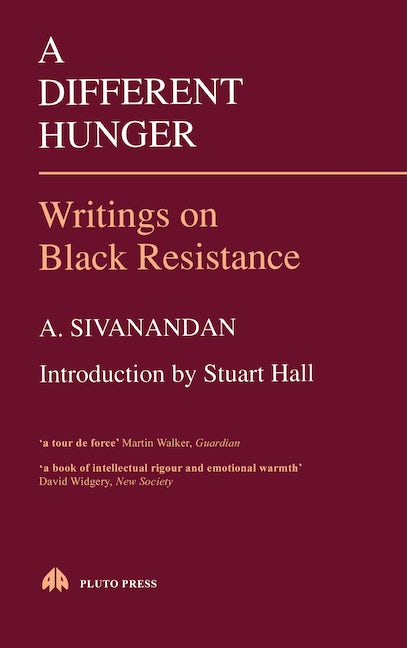 'Few writers can claim to have approached so clearly the organic connection between analysis and practice, which is the hallmark of the political intellectual' - Stuart Hall 'One of the most exciting and controversial political thinkers in Britain' - Guardian
Introduction by Stuart Hall
1. From Resistance to Rebellion: Asian and Afro-Caribbean struggles in Britain
2. Black Power: The Politics of Existence
3. Huey Newton and the Black Renascence
4. The Passing of the King
5. Jonathan
6. Angela Davis
7. James Baldwin
8. The Colony of the Colonised
9. Paul Robeson
10. The Liberation of the Black Intellectual
11. Race, Class and the State
12. Grunwick
13. From Immigration Control to ‘Induced Repatriation’
14. Imperialism and Disorganic Development in the Silicon Age
15. Race, Class and Caste in South Africa
Published by Pluto Press in Mar 1991
Paperback ISBN: 9780861043712
eBook ISBN: 9781783718207

Remembering Ambalavaner Sivanandan (1923 – 2018) the man who gave ‘the Left, the activist intellectuals as well as the Black brothers and sisters, eyes to see with and ways to hone new weapons of struggle.’

END_OF_DOCUMENT_TOKEN_TO_BE_REPLACED
Back to Top
X