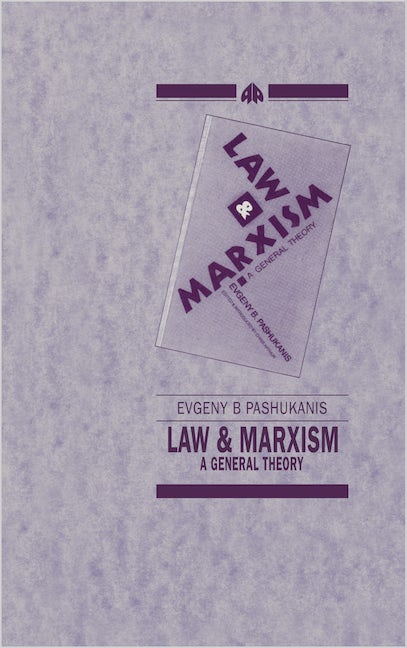 A classic Marxist study of jurisprudence theory from Marxist heavyweight.

This is a classic Marxist study first published in 1924 - one of the principal Soviet contributions to jurisprudence theory. It is an authoritative non-revisionist text offering both a commentary and a critique of prevailing Marxist and non-Marxist legal theory. Pashukanis states that juridical and state forms are linked to a specific type of class society - capitalist society. However, law comes not from the rule of the capitalist class but from the relations of production that created that class. Rights and laws are exchanged like commodities.

The author applies Marx's writings on contract and property law, giving sensitive attention to the interrelation of commodity values and individual rights. He considers the ritual, pomp and mystique of legal systems, and looks at law in relation to power structures, the state, exploitation, and morality.

Evgeny Pashukanis was born in 1891 of a Lithuanian family. He became a Bolshevik in 1912 and later was a Vice-Commissar of Justice and the editor of several legal journals. He was killed in the Stalin purges in 1937. Law and Marxism is his major work. This edition is translated by Barbara Einhorn.

'If any one book is going to accelerate the development of a Marxist criminology, then this is it' - New Society